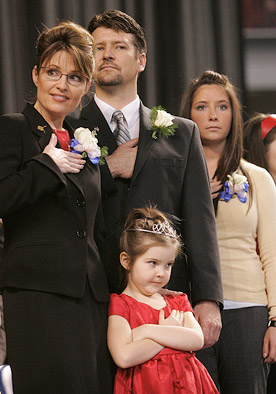 [1] The Palin family circus just NEVER stops, does it? It’s just one embarrassing incident after another. How could any sophisticated, serious person consider someone with a family like that for the Presidency?

First off, look at the people Palin grew up around. Her father was a polygamist[2] who abandoned the family when she was still a baby. Palin was then abandoned by her mother who left her in the United States[3] to go overseas. Then there were her grandparents. Palin’s grandfather was a pot smoking Communist with a FBI file[4] while she’s admitted that her grandmother muttered “racial or ethnic stereotypes that made me cringe.[5]”

Is it any wonder that Palin is the way she is after growing up around people like that? Then there’s her backwards family. I hate to be unkind, but you may have never SEEN a bigger collection of misfits!

Look at her half-brother George[6]. The man was living on a dollar a month — in a hut. Yet, with all the money that Sarah Palin has made, has she done anything to help him? Nothing. So much for her “Christian compassion.” Of course, it could be worse. Palin’s other half-brother Samson (What is it with the weird names in that family?) has been accused of trying to sexually assault a 13 year old[7]. Then there’s Palin’s parasitic aunt[8] who’s in the country illegally and living on the dole. Apparently, that sort of behavior runs in the Palin clan because her drunk driving uncle[9] is here illegally, too.

Although we need to treat Sarah Palin with compassion — after all it’s not her fault that she grew up like this — we also need to admit the truth. Anyone who grew up in this type of atmosphere is going to have some serious issues, ones that would dramatically impact her performance in any high stress, important job like the presidency.

PS: Wait a second….did I say “Palin?” Oh gosh, in all the places I said “Palin,” I meant to say “Obama.” On the other hand, his narcissistic out-of-touch, emotionally-stunted behavior makes a lot more sense now, doesn’t it?