Truckers Threaten To Shut Down D.C. For Three Straight Days To Protest “Corruption Against The Constitution.”

Have you heard about the newest protest? It’s truckers threatening to shut down D.C. in October[1]. 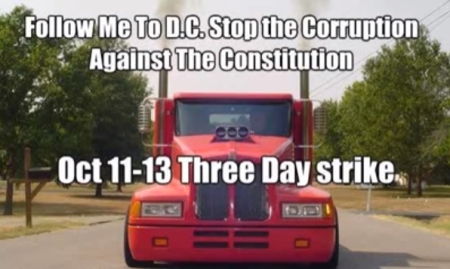 A group of truckers is reportedly planning to shut Washington, D.C. down for three days straight starting on Oct. 11 to protest the “corruption against the Constitution.”

…My fellow patriot this effort is to support the truckers in a major shut down of America ion [sic] a 3 day strike October 11th thru 13th. Obamacare will be in effect and most people will be ready to take action. No commerce on those days stock up on items that you will need. No banking no shopping no money transactions.

It does not matter if a million or 50 roll through DC in this effort. Congress will listen to We the People. Which is remove Obama from office for crimes of treason and misdemeanors. We want Congressional hearing on Benghazi and Seal Team 6. Louis Learner [sic] put in jail. No amnesty, remove all Muslims in our government that do not uphold the Constitution. Remove Eric Holder from office for crimes against the people and the Constitution. Last but not least is Fuel prices.

On the one hand, this is an innovative idea, but you can’t put Lois Lerner in jail without a trial, I’m not sure of the point of calling for “all Muslims in our government that do not uphold the Constitution” to be removed as opposed to anyone who doesn’t and treason is a pretty heavy lift. On top of all that, I can’t condone ANY protest that sets out to deliberately tie up traffic — even in D.C. Aggravating the average guy who just wants to get home from work doesn’t do anything to win people over to your side.