Every working family deserves a vacation, even President Obama’s family is entitled to some relaxing time off. But should tax payers fork out 5.3 million for Obama to wine and dine on luxury vacations[1]? I don’t think that’s an appropriate use of tax payer money, do you? 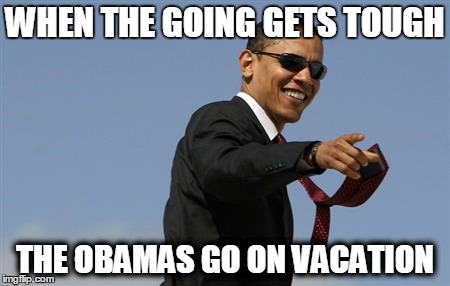 “Taxpayers, the U.S. Air Force and the Secret Service are being abused by Barack Obama, who too often treats Air Force One and his security detail like some of sort of kingly entourage,” said Fitton. “Taken together, the Obama family travel and Secret Service accommodations for the 2014 Martha’s Vineyard and Christmas Honolulu vacations cost taxpayers a total of $5,316,522.10. Does Barack Obama really think that over $5 million for two family vacations, which include nearly $1 million in Secret Service hotel bills for a two-week Martha’s Vineyard vacation, is an appropriate use of tax dollars?”

There’s a lot of things I could do with nearly $5 million. Maybe buy an island instead of visiting one. I predict the people of America become extremely upset at this wasted tax payer money. I’m happy to hear Obama treats his security well, but I do not think that a few vacations should cost that much. Even though airlines prices are insane, it’s not like Barry booked this on Orbitz.