USA Today Column: Was the spying in the Obama administration worse than Watergate?

So, in a USA Today Column the question that was asked and discussed was as stated here: Was the spying in the Obama administration worse than Watergate? 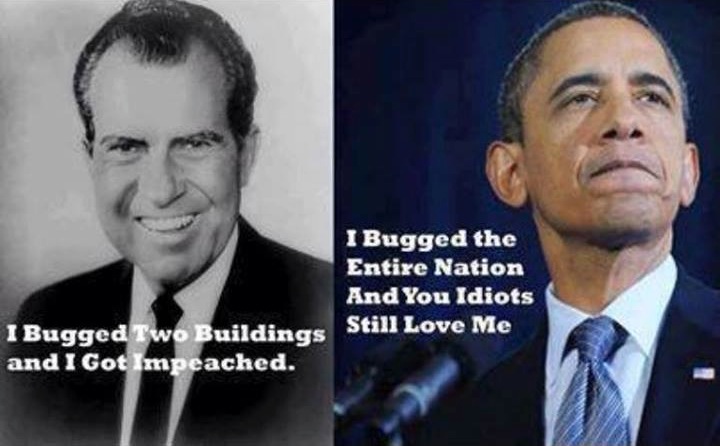 In 1972, some employees of President Nixon’s re-election committee were caught when they broke into the Democratic National Committee headquarters to plant a bug. This led to Nixon’s resignation and probably would have led to his felony prosecution had he not been pardoned by his successor, Gerald Ford.

But if a single bugging of the political opposition is enough to bring down a presidency — and maybe lead to an unprecedented criminal prosecution of a former president — then what are we to make of the recently unveiled Obama administration program of massively spying on political opponents in violation of clearly established law?

Because that’s what was unveiled last week[2].

I think the answer to this question is very clear and I find it hard to believe that not many people see it that way.

Obamagate is so much worse than Watergate. So much worse. Nixon wiretapped a room. Obama illegally surveilled 1000s of Americans, including President Trump, Republican news agents, SCOTUS, hundreds of judges, businessman etc. Susan Rice and Evelyn Farkas have already admitted this was the case. So much corruption.

However, it’s not just the wiretapping and surveillance that is blatantly WRONG with the Obama era…

Maybe Obama should share that jail cell with Hillary since he kept her out of it.

Trump “asked” Comey “if” it was possible to drop the case against Flynn.

Trump asked. Loretta and Barry demanded Comey do it.

The Obama Administration went totally unchecked by the media and was consequently able to get away with anything even when they were exposed i.e. IRS going after conservative groups, Benghazi caused by a video, Obama saying to Putin he would be more flexible after the election and all the lies told to the American public to get Obamacare passed. We are just getting started in finding out just how politically corrupt the community organizer was.

They are all corrupt, dishonest, selfish and respect nothing of this country or her Constitution. Nothing.

So, in conclusion, I say… Obamagate is worse.