Valerie Jarrett: You, the American people, ‘are hungry’ for Obama’s executive actions

Did you know that, according to: President Obama’s best friend and senior advisor: Valerie Jarrett, you, the American people, are “hungry” for moreexecutive action: and: executive orders: from the president? 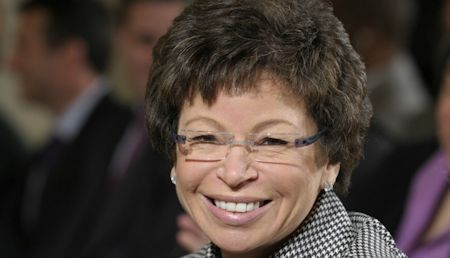 Jarrett appeared Tuesday on MSNBC’s “Morning Joe” to give a preview of Obama’s: State of the Union: address, touting how the president is “prepared to take action on his own,” without Congress, to push through his agenda, and that we will be enthusiastic after hearing his “very optimistic speech” Tuesday evening.

Because you, the American people, are “hungry” for that “action:”

People around our country are hungry for action, and what you’ll hear from the president tonight is going to be all about action – creating opportunity – and it’s going to be a very optimistic speech.

We will continue to call on Congress — both sides of the aisle — to come up with new and fresh ideas for how we can grow our economy…but we aren’t going to stop at that.

We’re going to do what we can, within the president’s own executive power, and working throughout the country with those who want to move our country forward. And there is a lot of potential there. And I think: the optimism that the president has comes from that grit and determination of the American people, of our businesses, many of who are bringing jobs back to America, so we have some momentum going, and we just need to call on everybody to work together, and that’s what the president will do this evening.