VIDEO: George Bush Destroyed Obama’s Ego in His Own House, This is Epic!

It’s been said by some that history will judge George Bush more kindly than his contemporaries did, and his time post-presidency has earned him more and more goodwill among Americans. When he returned to the White House for the unveiling of the portraits of himself and Laura Bush as President and First Lady, he had a few jokes to make — including a good zinger at Obama’s expense! 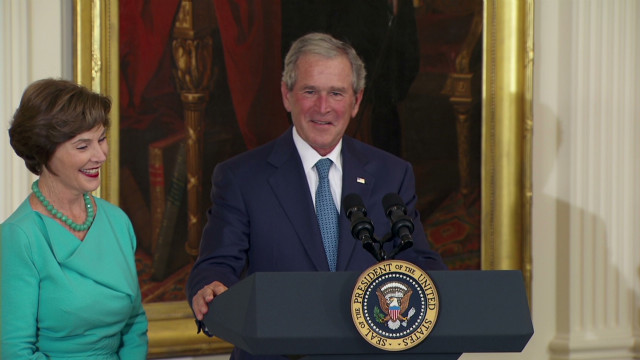 At the ceremony to unveil the portraits of President Bush and First Lady, Laura Bush, the pair had quite the time joking around being back in the historic Presidential mansion.

Bush even let one rip at Obama’s expense.

“I am also pleased, Mr. President, that as you are wandering these halls wrestling with tough decisions you will now be able to gaze at this portrait and ask, ‘What would George do?’”

… Judging by the decisions Obama has made, he never once has taken that advice.

Obama may gaze at the portrait and ask the question, but only so that he can then turn around and do the exact opposite. President Bush wasn’t a perfect president, and he made mistakes — but we were a stronger, better country under his leadership, and it was obvious that he loved his country. No one can say that for Obama.