VIDEO: Montel Williams to President Obama: Get the Marine Jailed in Mexico Out Now!

Many people just know Montel Williams as a talk show host – but he also served in the Marine Corps, first as an enlisted Marine, and then become an officer in the Navy after attending the Naval Academy. In an emotional video, Williams begs the president to intervene on behalf of imprisoned Marine Andrew Tahmooressi, who Obama has allowed to languish in a Mexican prison. 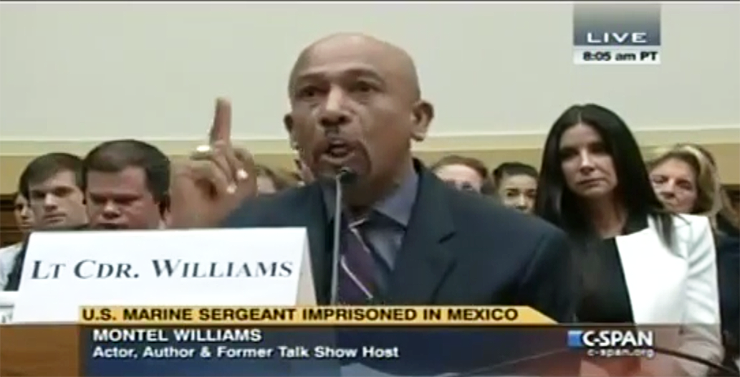 Talk show host Montel Williams appeared on Capitol Hill today to tell Washington D.C lawmakers that they need to do everything they can to help jailed Marine Sgt. Andrew Tahmooressi come home.

Tahmooressi has been imprisoned in a Mexican jail for over 6 months after accidentally crossing the border with licensed firearms in his vehicle. So far, the Obama administration has done next to nothing to help the Marine come home.

… “It is, right now, 11:05, if this hearing’s gonna stop in the next 10 minutes, I think the president needs to pick up the phone in 15…Make the call, make the call today,” Williams told members of Congress.

Williams, who was joined by Andrew’s mother, Jill, called the administration’s inability to help Sgt. Tahmooresi get released from prison, an “abomination.”

Obama practically moved heaven and earth to get a deserter back from the Taliban, even though there’s good evidence to suggest that Bergdahl purposely sought the terrorists out. But help free a Marine unjustly imprisoned for nothing more than making a wrong turn? Somehow, Obama just can’t seem to muster any outrage over that.