VIDEO: Obamacare Perfectly and Blatantly Summed Up in One Sentence!

What could go wrong indeed[1]? What hasn’t? Bellar should have been elected in a landslide, but then again we’re talking Marxist Illinois here. Barbara Bellar is a licensed attorney, a physician, and an adjunct faculty member at DePaul University and Benedictine University. She has a Master’s in Bioethics and Health Policy from Loyola University and a J.D. from John Marshall Law School. Bellar is a Veteran Major in the United States Army Reserves. She’s a conservative’s conservative. Guess what? She’s Tea Party[2] and a Christian. She works hard, plays hard, prays hard and studies hard. I would have voted for her in a heartbeat. She nails Obamacare in place. 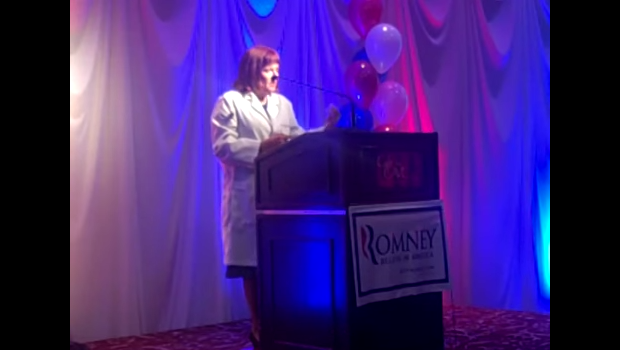 Best One Sentence Campaign Speech I’ve Ever Heard! All About Obamacare!

VIDEO: Barbara Bellar was a candidate running for State Senate in the Illinois 18th District in 2012.

“We’re going to be gifted with a health care plan we are forced to purchase and fined if we don’t, which purportedly covers at least 10 million more people without adding a single new doctor, but provides for 16,000 new IRS agents written by a committee whose chairman says he doesn’t understand it, passed by a Congress that didn’t read it, but exempted themselves from it, and signed by a president who smokes … same sentence … with funding administered by a treasury chief who didn’t pay his taxes, for which we will be taxed for four years before any benefits take effect by the government, which has already bankrupted Social Security and Medicare — all to be overseen by a Surgeon General who is obese, and financed by a country that’s broke.”

“What the blank could go wrong?”

Every single word she said was true. This was the very best summation of Obamacare I have ever heard and it was funny. It came from a doctor, no less. Bellar was too conservative, too Christian, too ethical and too good a person to be elected in the most corrupt state in the nation. That’s Obamaland… where the skies are red and the Communists run free. Bellar was also fired from a Chicago hospital for taking a stance against Obamacare. Figures. Hopefully we will see much more of her and she will continue her conservative fight.