What Exactly Makes Barack Obama Cool? All The Falling? The Nose Picking?

The media’s fawning over Obama knew no bounds, and yet, in the midst of the most incredible media conspiracy to turn this jug-eared clodhopper into some combination of Winston Churchill and a young Elvis, you were being a bore if you mentioned the liberal media. Oh surely we’ve exploded that old chestnut. … Look! Look, Obama just lit up another Marlboro! Geez, does smoking make you look cool, or what! Yeah, Obama! — Ann Coulter[1]

In their never ending quest to sell their fellow traveler Barack Obama to the American people, the press has incessantly harped on how “cool” he’s supposed to be. Oh, he’s not like all those “other politicians.” Oh no, Barack Obama is the sort of man Quentin Tarantino would cast as the kung-fu fighting President trying to save the world from assassins and Republicans.

There’s one big problem: Barack is not a cool guy. He’s an arrogant, prissy, lecturing blowhard who turns into a mumble-mouthed, crashing bore the moment he gets off a teleprompter — exactly the sort of man no normal person would want to go to a ballgame with. Moreover, Barack Obama is not a suave, dashing fellow.

Keep in mind, he throws like not just a girl, but a girl who’s never even played softball before:

He also bumped his head on a helicopter:

He once tried to walk through a FREAKING WINDOW into the White House: 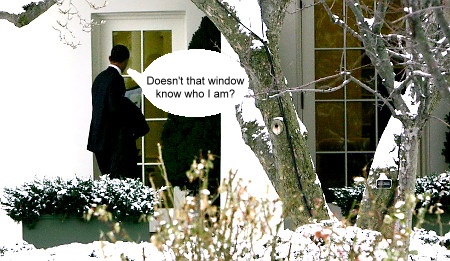 He’s even picked his nose on TV:

Yet, if you listen to the mainstream media, Obama’s Samuel L. Jackson, LeBron James, and James Bond all rolled up into one. When was the last time James Bond picked his nose on camera?