[VIDEO] While Describing what Obamacare Did to Her Husband, Congresswoman Holds Back Tears

“Were all of your statements a lie?” Congresswoman Cynthia Lummis to Jonathan Gruber, House Oversight Committee Testimony, 12.9.2014

Powerful statements. For a woman who lost her husband one week before the election, because Obamacare caused him to decline testing due to coverage issues, she controls her outrage towards Mr. Gruber surprisingly well: 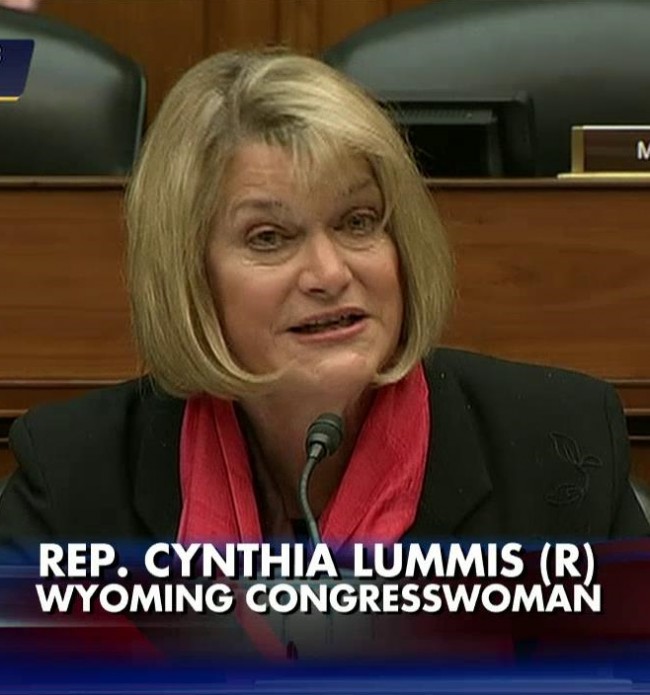 Congresswoman Cynthia Lummis insinuated yesterday that her late husband would still be alive if not for the implementation of Obamacare.

“My husband was having chest pains at the time that he was told we were not enrolled in Obamacare, and come to find out, he didn’t have all of the tests that he was advised by his physician to have,” Lummis said during Obamacare architect Jonathan Gruber’s testimony before the House Oversight Committee.

“So on October 24, a week before the election, my husband went to sleep and never woke up,” she said.

While she did not go so far as to say Obamacare killed her husband, Lummis believes he would still be alive if not for the law’s many obstacles and medical hurdles.

“I’m not telling you that my husband died because of Obamacare,” Lummis said.

“He died because he had a massive heart attack in his sleep. But I am telling you that during the course of time that he was having tests by a physician and was told we were not covered by Obamacare, that he then decided not to have the last test the doctor asked him to have,” she said.

Before yielding her time, Lummis referenced Gruber’s apologies for “glib” comments about the American people. In a trembling voice, she addressed those comments directly.

“Get over your damn glibness,” she said.

Gruber’s ‘glib’ remark happens at 2:23, and her heartbreaking personal story of Obamacare and the loss of her husband starts at 4:09. Such a tragic loss of life, for a basically healthy 65 year old man, should have never happened because of an Obamacare ‘glitch’ or lack of coverage for a life threatening procedure. No American should have to choose between medical testing due to lack of coverage, and living. Get over your damn glibness, indeed, Mr. Gruber.