For a warrior’s view of the Iraq war, it would be tough to beat the perspective of: Brian Kolfage: — a retired Air Force senior airman who lost three limbs in a rocket attack. 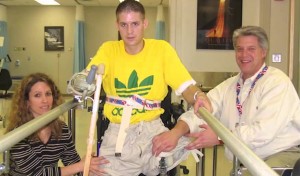 Kolfage’s perspective on President Obama: He looks like an “elitist rich thug,” not the leader of the free world.

In an open letter to Obama released on Presidents Day, Kolfage talked about attending public high school in Hawaii, bicycling past:  Punahou School, which Obama attended on a scholarship two decades earlier. He wrote:

Every morning I would ride past Punahou, the exclusive private school you attended and I would notice all of the Bentleys, Maseratis, and fancy foreign cars that all the kids were dropped off in; wow it must have been extremely rough in Hawaii living that life, right?

Kolfage also talked about the two men’s different experiences after high school, with Kolfage joining the military and the future president attending Occidental College in Los Angeles and Harvard University.

But the letter isn’t about the different opportunities life offers. It’s about what happened to Kolfage in Iraq, and what he sees happening now, under the leadership of a president who built his political career opposing a war that his party leaders helped launch. The wounded warrior wrote:

I volunteered to go to Iraq on both of my deployments, and the second time I begged to go even after I wasn’t selected. : During that second deployment, I was ultimately placed on the team where I would lose both legs and my dominant arm. : Even though many Americans were against the war in Iraq, I’ve never asked myself if it was worth it after losing 3 of my limbs.

While I was in Iraq, our mission was to liberate the Iraqi citizens from a tyrant and that’s what we did. Never forget, it was your people who sent us there, like the Clintons, John Kerry, Nancy Pelosi & Carl Levin.

But the American mission in Iraq was always secondary to Obama’s mission to become president — and remain president in 2012, Kolfage wrote, saying:

It clearly means nothing to you, because the only thing that you’ve personally invested in that country was a promise to bail on them. However, people like me gave limbs, friends have died, and we’ve watched families destroyed by war’s aftermath.

The Arizona resident, an outspoken Obama critic for years, has been assailedon his Facebook page[2]: by Obama supporters and even tangled with the Department of Veterans Affairs over disability-payment disputes that some Kolfage: supporters suspect are aimed at keeping him silent.[3]

It’s important to note here that the libs can’t dismiss Kolfage as some disaffected vet who, no matter what his service to the country, can be dismissed as a bitter partisan stewing in ideological hatred.

Besides being an architecture graduate from the University of Arizona, in 2012, he was a member of the Veterans Advisory Council for former Rep. Gabbie Giffords, D-Ariz. He was even Giffords’ invited guest to Obama’s 2012 State of the Union address – the night Giffords was being honored for her return to the House after being wounded in an attack by a crazed gunman.

Kolfage ended his letter to the president by saying:

You’re just another elitist rich thug who’s pretended to live the rough life growing up in the inner-city. You’re only worried about your own agenda and furthering your party instead of taking care of Americans. : Your inability to be a leader at some of the most critical points has caused both of our wars to fail. You’ve been a joke to most of our veteran community and we have no faith in your ability to lead.

You can read Kolfage’s letter: in its entirety here.[4]