BETRAYAL! Ben Carson Followers ENRAGED Over His Trump Endorsement – Now They Do THIS!?

Dr. Ben Carson announced his endorsement[1] of Donald Trump today on Facebook. He did this despite Trump eluding to him being pathological and a child molester. Trump said it was just part of the ‘game’ to get elected. Carson’s followers erupted in outrage and disbelief after he made his announcement. I’m right there with them. He turned against a man of faith, Ted Cruz, to endorse a self-loving, bully. It’s mind boggling. So much for being a man of character, principles and faith. I guess he came to an ‘agreement’ with Trump… he met his price sometime between Iowa and today. So many Christians are now feeling they are being demonized here. Drudge is running headlines against Cruz, taking his father’s quotes out of context and smearing him for praying and for religious leaders laying hands on him. It’s insane and sad. 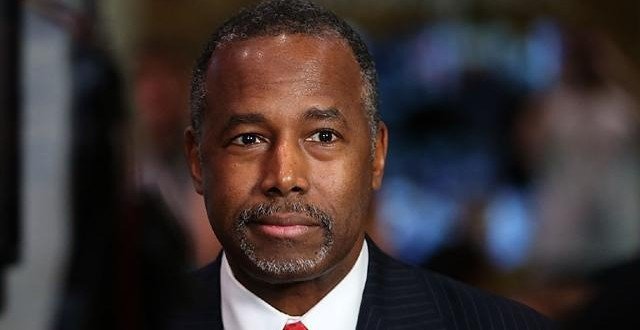 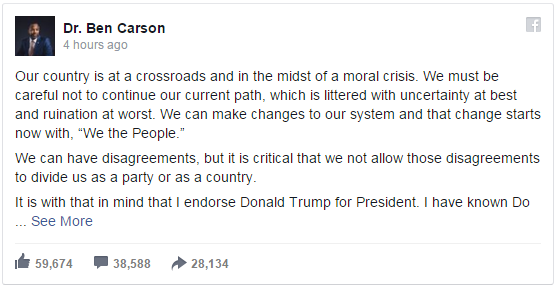 Our country is at a crossroads and in the midst of a moral crisis. We must be careful not to continue our current path, which is littered with uncertainty at best and ruination at worst. We can make changes to our system and that change starts now with, “We the People.”

It is with that in mind that I endorse Donald Trump for President. I have known Donald for many years. He is a successful businessman who has built a recognizable global brand that no one can question. His experience as a businessman is exactly what we need to move our economic engine in the right direction and empower those who have been left out of the American dream for far too long.

With our support, I am sure that we can help restore America’s values and faith.

I know there will be some who want to underscore our differences and others will wish to return to statements he has made about me in the past, but that is politics. As a man of faith, all is forgiven and we have moved beyond the past, as the future is now.

Join me in supporting and rallying around the only candidate the GOP has that can defeat Hillary Clinton in 2016 and return America to that shining city on a hill.

The comments on FB pretty much tell the story. Here’s a sample:

Tina: “Very disappointed in you, Dr Carson. This campaign is the antithesis if what you said you stood for.”

Vicky: “I’m absolutely heartbroken that you have chosen this path! It destroys everything I believed about you.”

Debi: “No no no no no!!!!!! Please Dr. Carson no!!! He has made a mockery of all you fought so hard for!!!! I am beyond shocked and disappointed that you would stoop to endorse that wolf-in-sheep’s-clothing…… I am SO disheartened by this!! You didn’t have to endorse anybody, let alone hiM!!”

Lori: “I could not be more disappointed in you Dr. Carson. You are not the person I thought you were. I feel misled and betrayed by you. I thought you had an unwavering moral compass, but your support of Donald Trump proves that you do not.”

Maria: “This is so disappointing. Trump goes against everything I believe in.”

Kevin: “Can’t believe you chose to support the one candidate who mocks God and is definitely not a Christian. Very disappointed in you and have lost much respect.”

Brenda: “Well I have just lost all respect I had for you Dr. Carson. My husband and I were going to vote for you and you had to end your campaign, which we understand, but to we cannot back a schoolyard bully like Donald Trump.”

Andrea: “I am incredibly disappointed in your decision. I voted for you and admire you. But I believe you are letting your feelings regarding Cruz and the anew Hampshire situation cloud your judgement. Trump is not what this country needs and not who I want my children to look up to. I wish you would reconsider your decision and give your delegates to Cruz.”

David: “Honestly I feel used. I feel like you sold out. You speak of Party as if it has relevance in the kingdom. I am hurt and feel like you have used the flag of Christ to sell out for political gain. I will never support Donald Trump.”

The Republican Party is now split permanently I believe. We will almost assuredly have at least a contested convention. I pray that Ted Cruz prevails and we do not get Donald Trump. If Trump is the nominee, many of us will have to search our hearts and souls and decide if he is the lesser of two evils. I fear this nation has turned her back on God for the very last time. That is just my thought on the subject. I am bitterly disappointed in Ben Carson who claimed to be a man of God. He’s just another pawn in Trump’s game and he’s playing all of us.