Trump Puts Liberal Idiots on ‘The View’ in Their Place

I’m no fan of Donald Trump[1], but he did set the shrews of The View on their heels. Evidently, led by Whoopi Goldberg, they descended on Ben Carson for supporting Trump. Trump is not a racist… that smear just doesn’t play. He’s also publicly denounced the KKK. He does disparage women and that is just simply abhorrent. In fact, I’ve had my fill of that from Trump. But these women were going after liberal points… not the fact that Trump compared Carson to a pedophile and other vile things. Or the fact that Carson said he endorsed Trump because a friend of his had a dream that told him to do it. Or the fact that Carson is cool with Trump, because hey… all politicians lie. No, they went after the Muslim and illegal immigration angle. Way to miss the point. 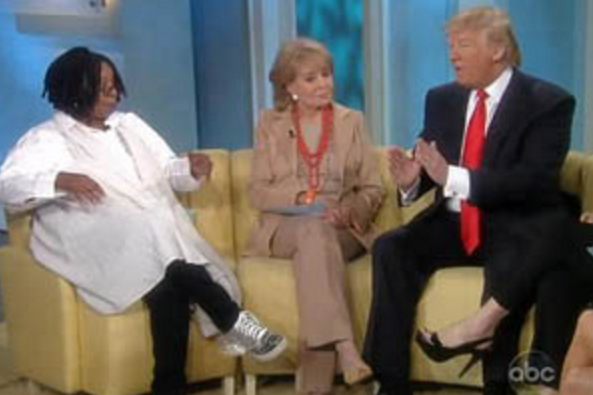 When Trump backer and former presidential candidate Dr. Ben Carson showed up on “The View,” he was predictably sandbagged by the liberal ladies who have long haunted that show.

Afterwards, though, it didn’t take long for Donald Trump[3] to show up on Twitter — and what he said absolutely obliterated the women on “The View.”

Having said all that, it is just vile to disrespect Ben Carson this way publicly. He deserves better treatment than that. But he should be able to stand up for himself without Trump Tweeting to the rescue. And Trump didn’t really defend Carson, he just said that The View is washed up and should be destroyed. That’s not the same thing. He didn’t counter any of the charges, he just bullied back. Which is never okay and is not presidential. You can’t justify bad behavior from a candidate because of bad behavior from liberals and the media. Two wrongs don’t make a right. It’s the same kind of behavior seen with the smears against Ted Cruz which are blatant lies and which I believe Trump is behind. Nothing like everyone wallowing in the mud together.