Bernie Sanders has Pledged $19.6 TRILLION in New Taxes – Adding Almost 50% to What Washington Takes In

Socialism isn’t cheap, and Bernie Sanders’ campaign is proving it. The amount of new taxes he’s pledged to fund all of his little pet projects is astronomical. 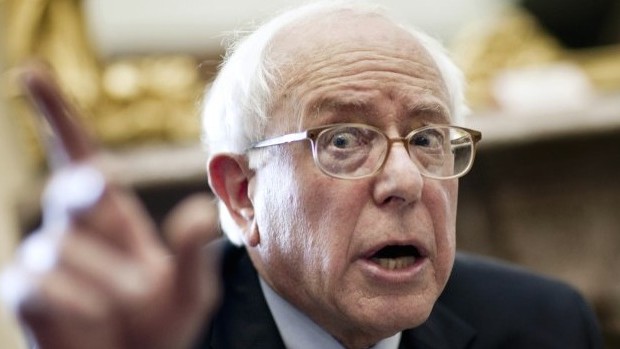 Bernie Sanders wants universal health care and a number of other programs that are politically aligned with his democratic socialist ideology and he’s going to pay for them by raising taxes.

The Washington Examiner conducted an analysis and found that Sanders’ plans will mean approximately $19.6 trillion in new taxes over the next decade.

Sanders, the Examiner found, will raise taxes by 47 percent over the current levels.

And the bulk of additional new taxes would pay for it.

Of the $19.6 trillion figure, $14 trillion would come from the health care plan.

Employers would be taxed at 6.2 percent to pay for the new federally-run Medicare-for-all system.

This would bring in $6.3 trillion, the Examiner’s Philip Klein estimated, while warning this tax could be passed onto employees.

The Vermont senator, who is giving Democratic frontrunner Hillary Clinton a run for her money in the early states of Iowa and New Hampshire, has said that the savings will more than make up for paying the tax.

In essence, Sanders argues that the government-run system will be easier on the pocketbooks of American employees, compared to the current amounts pulled out of their paychecks when they pay their portion of the private insurance bill.

Another $3.1 trillion over 10 years would come from ending the tax free status of employer health insurance.

Sanders has said that with universal health care this tax break will be moot and he’ll be able to raise $310 billion a year from it.

He also plans to tax individuals for health care – a 2.2 percent tax that would add $2.1 trillion to the pot over 10 years.

The senator also wants to pay for healthcare by raising the marginal income tax rate.

This would bring in about $1.1 trillion over a decade.

Capital gains taxes would be hiked as well, to pay for health care, bringing in $92 billion a year, or $920 billion over 10 years.

The estate tax, or the death tax as it’s preferably called by Republicans, would be raised in several ways, according to the Examiner, which could generate another $243 billion to go toward health care.

One-percenters would also be hit as Sanders scrapped tax deductions households making more than $250,000 can take.

The Examiner figures that’s another $150 billion that could go toward Medicare-for-all over 10 years.

Moving on from health care, the Democratic challenger wants to tax speculation on Wall Street, bringing in $3 trillion over 10 years, in order to pay for his plan to offer free tuition to students attending public colleges and universities.

… Those making more than $250,000 a year will be expected to pay more into Social Security, as a way to expand the system with $1.2 trillion forecasted to be gained in 10 years.

Infrastructure spending would be paid for by taxing offshore corporate income, which could bring in $1 trillion over 10 years.

Sanders’ plan for mandatory family leave would be paid for by increasing the payroll tax by 0.4 percent, split between employers and workers.

This could bring in $319 billion over a decade, the Examiner found.

Alternative energy subsidies would be paid for by taxing oil companies bringing in $135 billion over a decade.

Finally Sanders’ youth jobs program would be paid for by taxing financial firms for the carried interest they earn.

So basically, if Bernie Sanders is elected president, the American economy will be completely and totally crippled. Or is he going to plant millions of money trees, too?