Guess Bernie Sanders[1] was only mostly dead after all. Sanders swept all three Democratic caucuses in Washington, Alaska and Hawaii. He’s nipping at the Hildabeast’s heels again. She must find that really annoying. Delegate count for Hillary is at 1,712. Delegate count for Bernie Sanders is now at 1,004. They are virtually neck and neck. Delegates remaining in this fight to win for the Democratic nomination total 2,049. Once again, Hillary’s crown as nominee is in doubt. The elderly moppet socialist is giving her a run for her corrupt money. This means even more money for Sanders as he does especially well when fundraising after a win. Sanders didn’t just win these caucuses… he won in three separate landslides. Feel the Bern, Hillary. 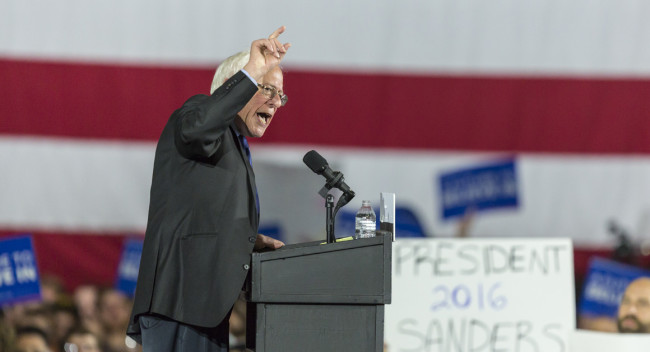 While the underdog’s West Coast wins are not nearly enough to trip up former Secretary of State Hillary Clinton’s path to the nomination, Sanders’ wide margin of victory provides his campaign with a burst of momentum heading into a 10-day break before the next primary contest. The Vermont senator’s big victories are also typically followed by a considerable fundraising bump.

Sanders was victorious in Washington state’s caucuses 72.7 percent to Clinton’s 27.1 percent and won Alaska’s caucuses by a landslide, defeating Clinton 81.6 percent to 18.4 percent. At 4 a.m. Sunday, with 87.8 percent of precincts reporting, Sanders was declared the winner in Hawaii, leading Clinton 70.6 percent to 29.2 percent.

Sanders’ win in Washington — the day’s big prize with its 101 delegates — comes after Clinton’s campaign worked to minimize his advantage there and tried to stop him from gaining too much ground in the delegate race. What I don’t get is that the pundits are saying that despite what looks to me as an increasingly close race, Bernie probably won’t cut too much into Clinton’s lead. The reason she leads Sanders by 708 delegates, is that 300 are already pledged. She didn’t do anything to get them. That Sanders is so close is a miracle in itself. If Sanders can take Progressive Seattle in Washington, what’s to stop him in California? And maybe even New York. I don’t have a lot of interest in the Democratic runoff – either candidate would be bad. But part of me is glad to see Hillary take a hit from someone she considered not even a remote threat to her political aspirations.