A megachurch pastor from Texas[1] (of course!) has now called on Bernie Sanders to apologize to Christians or resign as a sitting Senator. This comes after Sanders applied a religious litmus test to President Trump’s nominee for deputy White House budget director. Last week, Sanders questioned Russell Vought’s Christian beliefs and his stance on Muslims in regards to whether he was qualified for the position or not. This engendered a vociferous outcry from Constitutionalists and Christians.

Dr. Robert Jeffress, senior pastor at First Baptist Church of Dallas, released a statement bluntly stating that what Sanders did was an assault on the Constitution and more than 41 percent of the American people. It shows a shocking lack of knowledge about both the Constitution and the Christian faith. Sanders was rude and condescending as well. Typical damned Marxist. In my book, an apology won’t cut it. Sanders should just resign… but the bitter old Muppet will never do that. 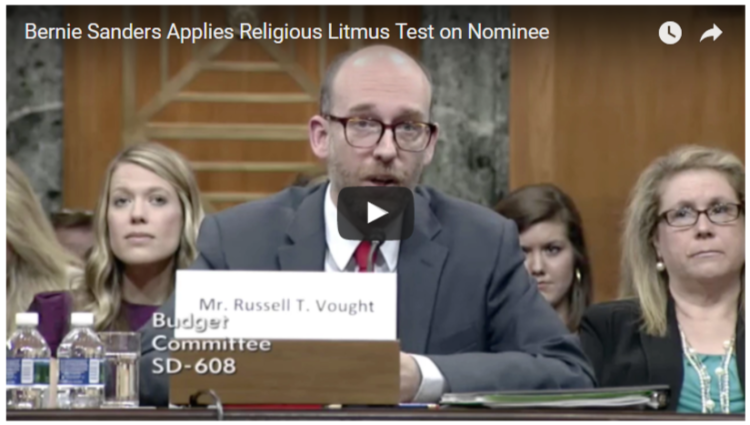 At a hearing last Wednesday, Sanders combatively grilled[3] Trump nominee Russell Vought, ultimately saying his religious values disqualified him for public office. Sanders, a self-avowed socialist, said Vought is “really not someone who is what this country is supposed to be about.”

Dr. Robert Jeffress, senior pastor at First Baptist Church of Dallas, released a statement in the wake of Vought’s Senate hearing, pushing back against Sanders’ intense questions for Vought, based on a 2016 column[4] the nominee wrote in which he differentiated between Christian and Islamic theology.

“Because of this assault on the Constitution and on fully 41 percent of the American people,” Jeffress’ statement said[5], “there are only two responsible courses of action for Sen. Sanders — apologize to the country for his foolhardy attempt to introduce an unconstitutional litmus test that would exclude 41 percent of the country, or resign.”

Sanders’ barrage of combative questioning was definitely akin to an “unconstitutional religious test.” The pastor said Sanders inquiries were an attack on Vought’s religion because the comments in his 2016 post — that Muslims have a “deficient theology” and “stand condemned” if they don’t accept Jesus Christ — are “historical Christian beliefs.” And that is exactly right.

You have to give it to Vought… he didn’t back down and he stood his ground on his Christian faith. Good for him. Sanders said he would vote against Vought because of his Christian convictions. “These words, and this sentiment, are not only unconstitutional, but unconscionable by a public official,” Jeffress asserted. “This attack by Sanders is abhorrent because he has effectively said that evangelicals, who make up 41 percent of the population of our country, are not qualified to serve in public office, and ‘not what this country is all about.’”

Vought wrote the 2016 post for The Resurgent in defense of his alma mater, Wheaton College, for dismissing a professor who claimed Christians and Muslims “worship the same God.” Vought asserted that a person cannot “know God” without fully accepting and depending upon Jesus Christ. That is what all true Christians believe and we should not be persecuted for our beliefs any more than any other religion is. Beliefs only come into question if they break the law or are harmful to others. They certainly don’t apply to whether you are qualified to hold political office or not. Shame on Sanders.