What happens if you’re a Trump supporter in Bernie territory? YouTuber Joey Salads did a little experiment and he found out that Bernie Sanders supporters are pretty violent. 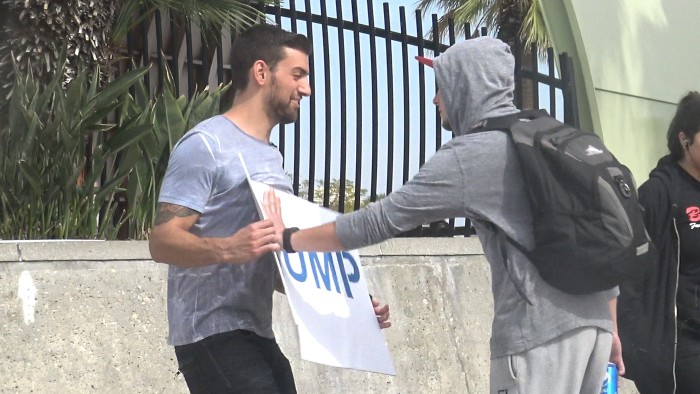 Salads hit the streets of north Hollywood to compare reactions to him holding a Trump sign and a Bernie sign.

People exiting a metro station didn’t react to the Bernie sign, but as soon as Salads switched to a Trump sign he began to receive hostility.

One man with a skateboard tells Salads, “It’s people like you that are the problem in this country,” before asserting that he plans to vote for Bernie.

“He is racist, man….everything that comes out of his mouth,” the man continues, arguing that Trump opposing illegal immigration is racist.

“I’m offended by it, to tell you the truth,” states the man before getting aggressive and shoving Salads’ Trump sign with his skateboard and telling him “f**k you!”

“Racist, fascist pig,” states another woman as she walks past Salads holding the Trump sign.

“F**k Trump, he’s a f**king racist,” an African-American man tells Salads before swatting the sign out of his hands.

Salads then meets a parade of Bernie supporters who call him a racist before numerous people driving past in cars give him the finger.

“Feel the Bern!” yells another driver who proceeds to throw a bottle of water at Salads.

As soon as Salads switches to a Bernie sign, the middle fingers turn into thumbs up.

Well, absolutely no one should be surprised by this. Liberals have always been the violent ones, right?