Doddering Bernie Sanders[1] is accusing President Trump of being a fraud. He’s decrying Wall Street and Trump’s connections to them and billionaires. He’s furious that Trump’s Cabinet is going to cut entitlements… spoken like a true socialist. He kept bringing up the worker’s class in shades of communism. Trump was very kind to Bernie Sanders… not sure why, he certainly doesn’t deserve it. He’s the dishonest fraud here… talking about sharing the wealth while living in multi-million dollar homes. He’s furious that Trump is trying to do away with regulations and peel back Dodd-Frank. What a putz.

Talk about hypocrisy… see Bernie Sanders. And we are not a Democracy, we are a Republic, you moron. This was almost articulate, except in all the places it wasn’t. It was a rambling rant from a guy who really, really needs to retire for all our sakes. I was not a staunch fan of Trump while he was running, but I think his Cabinet picks are terrific for the most part. Being wealthy doesn’t make you evil. Being a corrupt Marxist does and Bernie Sanders should know. This is a man who never held a real job a day in his life. The one time he did, he got fired. So spare us your pronouncing judgement on President Trump who has been a success most of his life. 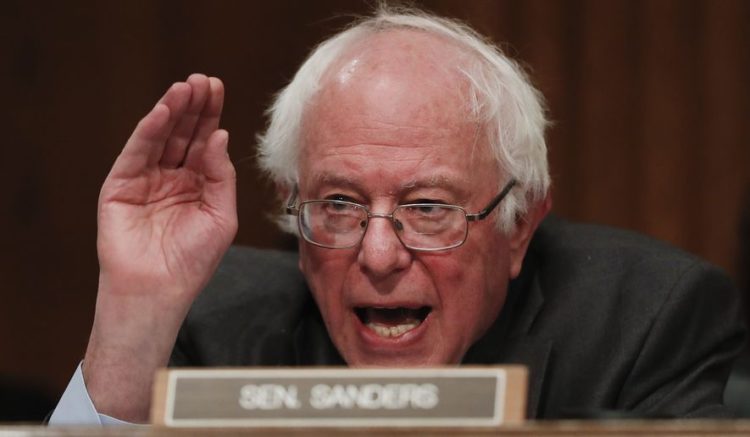 Sen. Bernard Sanders on Sunday called President Trump[3] “a fraud” who is selling out voters who believed they were electing a man who would stand up to Wall Street, pointing to the number of millionaires and billionaires nominated for Cabinet posts and moves to roll back some federal financial regulations.

Appearing on CNN’s “State of the Union,” the Vermont independent and progressive hero said working-class Americans who voted for Mr. Trump[4] will soon realize they were conned.

“It is hard not to laugh to see President Trump[3] alongside these Wall Street guys … This guy is a fraud,” Mr. Sanders said. “I hope all of these folks who voted for Mr. Trump[4] because he thought he would stand up for working people, man … I think he’s going to sell out the middle class and the working class of this country.”

This is the same rhetoric Sanders spewed during the primaries… that we were all being conned. Well, Trump is President now and he isn’t. And so far, Trump is keeping most of his promises. Thank God someone like Bernie Sanders didn’t get in… he would have finished us off with free healthcare and free education for everyone. He would have finished destroying the Constitution and the rule of law, while bankrupting us. Socialism never ever works.

Far from selling out[5] the middle and working classes, Trump is bringing jobs back to America and firms are hiring again. The only ones selling out real Americans are leftists like Bernie Sanders. It figures CNN would put him on. Shame on Jake Tapper for letting a Marxist vomit all over the media like this.

Trump selected Steve Mnuchin, a former Goldman Sachs trader and hedge fund manager, as his treasury secretary nominee; Wilbur Ross, a billionaire former banker, to lead the Commerce Department; and Gary Cohn, a top Goldman Sachs executive, to lead his National Economic Council. Just because someone works for Goldman Sachs, does not make them the devil incarnate. They are successful businessmen. If you want something fixed, go to someone who is successful to fix it. Duh. Trump signed an executive order on Friday that sets the stage for rewriting US financial regulations in an effort to encourage more lending to American businesses and it is badly needed in our economy now, thanks to the likes of Bernie Sanders, Barack Obama and Hillary Clinton.

Bernie can laugh at Trump all he wants… but Trump will have the last laugh on him. I shudder when I think that someone like Sanders came so close to destroying America.