Commie Bernie Sanders[1] and Bill Nye, the fake science guy, got together on Facebook to discuss climate change. Shucks… I missed it. Of course, I would rather be stomped to death by a herd of wild horses, but darn. They are both literally evil AND insane, so you can imagine the utter stupidity of their confab. Not to mention these two elderly moonbats are just as boring as drying paint. More so, actually.

Bill Nye is not a scientist and is just downright creepy. Bernie Sanders is a raving Marxist, who has delusions of grandeur. The left has no solid facts to back up climate change and in fact, there are a ton of reputable scientists who say they are stone cold liars and are full of it. What do you do when logic and facts don’t back you up? Well, you bring in guys from the left that have had face time on the boob tube and have at least a minor recognition factor. I guess Al Gore and Leonardo DiCaprio were unavailable. But someone has to shill for this scam… there is money at stake and power. So, these two bozos are up to bat. It would have been much more entertaining if they had gone all Punch and Judy and hit each other with bats, but I’m learning to live with disappointment. 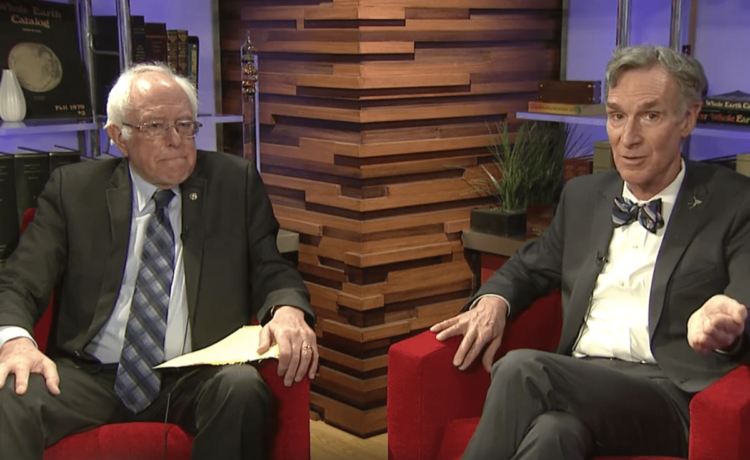 Bill Nye and Bernie Sanders discussing Global Climate Change Cooling Warming live on Facebook is proof God loves us and wants us to be happy. The two are among our favorite chew toys here at LwC (see Idiot Bill Nye ‘Explains’ Climate Change and Terrorism Link[3] and Bernie Sanders Gets Schooled in Reality by Pro-Trump Small Business Owner[4]). The schlump factor in this video is off the charts.

Sure, Bill Nye is as much a “science” guy as fact checkers “check” “facts,” but this is what the left does. Can’t win an argument, call in a celebrity. Still can’t win the argument? Call in a wannabe celebrity who’s also a wannabe scientist. Nye is to Cooling Global Change Climate what Samantha Bee is to totally unbiased news…

Science and politics should not mix. The two have nothing to do with each other and when you bring them together, bad things happen. But since when has that stopped these dolts? Both sat there lecturing everyone on how doomed we all are because we are destroying the planet. They demand that we DO something! Like we even matter when it comes to Mother Nature. We can clean up pollution, but as for destroying the planet, we leave that to rogue asteroids, aliens and wayward Gods. None of those were present during this discussion… trust me.

They use scare tactics and hyperbole instead of science and facts. They both have the IQ of a kumquat… combined. Man, I hope they take this act on the road. Please come to Oklahoma this spring, y’all. I’ll check the weather and tell you when is a good time to drive here. Then I’ll get you a lift to Kansas and you can say hi to Dorothy for us. At least that would be entertaining.