At least Betsy DeVos is sane[1], which is more than you can say for her predecessor or Barack Obama. She’s bluntly saying that throwing money at the problem isn’t solving it and boy, isn’t that the truth. Obama and others have thrown billions at our school system and all it has done is made corrupt officials wealthy. It sure as hell hasn’t helped our kids or the schools themselves. It’s like all that money goes into a giant black hole and just disappears. The graft and corruption connected to it is massive. I’m glad that DeVos did this. It’s way past time.

All that money and math and reading scores just keep going down. And the problem isn’t the kids… it’s the teachers, the teachers’ union and the superintendents, politicians and school board officials and others who are gaming the system and lining their pockets. They’ll scream bloody murder over this, but it has to be done. DeVos went further: “Waiting and hoping for a miracle, while blocking efforts that can help millions of children immediately, is simply not something this administration will abide,” she said.

In one of her first major policy addresses as education secretary, Betsy DeVos[3] made it clear that multi-billion-dollar education experiments conducted under the Obama administration have come to an end.

During a speech Thursday at the Brookings Institution, DeVos said the Obama-era concept of throwing money at schools has proven to be a failure. DeVos, a champion of school choice, noted that critics of choice insist money must be poured into “broken schools.”

“If only schools received more funding, they say, the schools could provide a better learning environment for those being left behind. But of course, we’ve already tried that, and it’s proven not to work,” she said.

She then demolished[4] the contention that money equates to results by revealing the impact of a $7 billion program known School Improvement Grants hailed by the Obama administration as its “biggest bet” on education.

She said a report on the results, released only two days before the end of the Obama administration, found “that implementing any SIG-funded model had no significant impacts on math or reading test scores, high school graduation, or college enrollment.”

“At what point do we accept the fact that throwing money at the problem isn’t the solution?” DeVos said. “Good intentions and billions of dollars clearly aren’t enough to give students what they need to succeed.

DeVos spoke of empowering students and parents. Treat children as capable individuals and really help them excel. “We must shift the paradigm to think of education funding as investments made in individual children, not in institutions or buildings,” she said. To fix education, DeVos knows we will have to think outside the box and color outside of the lines like Uber did. “Just as the traditional taxi system revolted against ridesharing, so too does the education establishment feel threatened by the rise of school choice. In both cases, the entrenched status quo has resisted models that empower individuals. Nobody mandates that you take an Uber over a taxi, nor should they. But if you think ridesharing is the best option for you, the government shouldn’t get in your way,” DeVos said.

“We celebrate the benefits of choices in transportation and lodging. But doesn’t that pale in comparison to the importance of educating the future of our country? Why do we not allow parents to exercise that same right to choice in the education of their child?” she added. The results coming out of our schools scream for a different approach. School choice is a great start. “The definition of insanity is doing the same thing over and over again and expecting different results. That’s not policymaking. Neither is education reform without changing the culture around education,” she added. “Changing the culture starts with shifting away from an ‘us versus them’ mentality. The focus shouldn’t be on whether we have a ‘public’ system, ‘private’ system, ‘charter’ system, ‘virtual’ system: It should be about the child, and about what is best for each individual student,” DeVos said.

“I think we need to change the conversation from how we invest in schools, and what types of schools we invest in, to investing in students. At the end of the day, if the finest school building with the best teachers isn’t educating all of its individual students effectively, that school is failing those students,” she said. And isn’t that what it comes down to? School was meant to help and elevate each student. To give every one of them a chance at creating a successful life on their own. Right now it doesn’t do that… it doesn’t teach them how to live, survive or succeed. It helps them fail and that must be fixed. 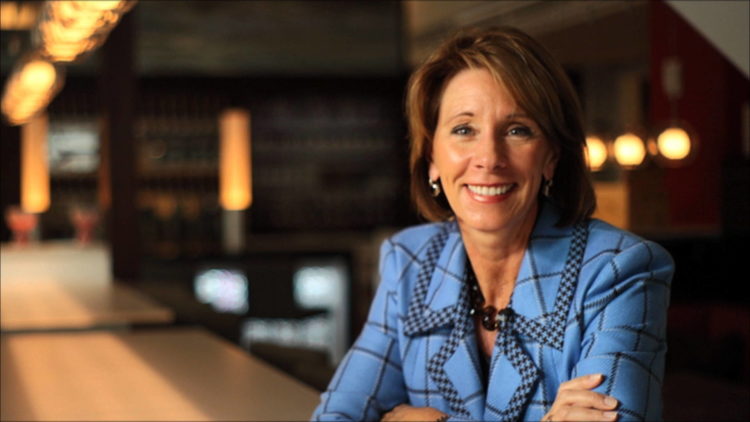