Two of the most pernicious lies leftists use to advance their agenda are the notions that constructive human activity makes it to be too hot out, and that blacks are somehow oppressed. Combining them makes for a cocktail of moonbattery so intoxicating that it has motivated British Black Lives Matter kooks to (again) shut down an airport:

London City Airport was brought to a standstill by Black Lives Matter demonstrators who stormed the runway early this morning to protest against the UK’s ‘racist climate crisis’.

The mayhem began at 5.40am when nine protesters chained themselves to a tripod in the middle of the tarmac to ‘highlight the UK’s environmental impact on the lives of black people’, cancelling dozens of flights and delaying several more.

Despite lunatic immigration policies, there aren’t many blacks in the UK yet. But there is no need to wait until a substantial underclass has been imported for the chaos to begin, since activists don’t need to be black; they only need to be sociopathic and completely full of crap.

The incident triggered huge security concerns amid reports the demonstrators – who witnesses described as ‘white and middle class’ – managed to get airside by sailing a blow-up dinghy across the Royal Docks.

Despite the serious breach to the airport’s perimeters, police spent several hours ‘negotiating’ with those responsible as they waited for ‘specialist resources’ to unlock them, causing chaos for passengers.

It is this kid gloves treatment that allows a handful of malicious idiots to wreak such havoc.

It was only after six hours that all the protesters were successfully removed from the site and taken into police custody.

Here is the justification for screwing up the travel plans of thousands:

After arriving on the site, the group released a statement saying black people are ’28 per cent more likely to suffer air pollution’ and that the airport was allowing a ‘wealthy elite’ to fly around the world while migrants are drowning in the Mediterranean.

Leftists frequently conflate pollution with the release of beneficial CO2, which has a perceptible effect on the weather according to their faith.

Other moonbats agreed that the cause was just,

including the Green Party, who said the activists were ‘right to highlight the unequal way pollution affects BAME (black, Asian and minority ethnic) communities’.

Rich people cause the weather, which is mean to nonwhites, therefore the airline industry needs to be sabotaged. Got it.

Treating BLM types as anything other than malign lunatics only encourages them to ever more damaging acts of malice. 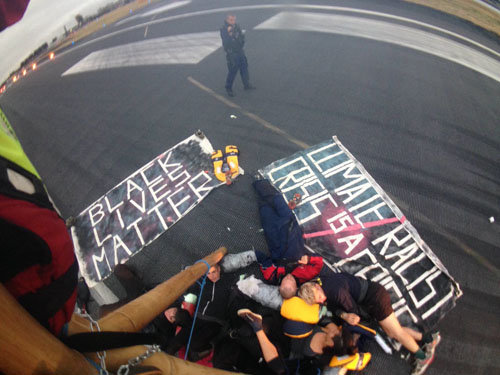 Moonbats shutting down an airport in the name of insanity.

On a tip from Saxon Warrior. Cross-posted at Moonbattery.