DeRay McKesson and Black Lives Matter have set their sights on Fox News host Judge Jeanine Pirro. They are claiming that she defamed McKesson on national television by saying he incited violence against police. More lawfare. Great. But they may have picked the wrong attorney to tangle with. Pirro has been a lawyer most of her life and a good one. She’ll probably shred them over this and they’ll wind up paying her bills. Just sayin’. Frankly, I think she’s dead on concerning McKesson and Black Lives Matter.

McKesson’s lawsuit is just one of many that have emerged since Black Lives Matter protests in Louisiana took place against the 2016 shooting of Alton Sterling. McKesson was arrested during those protests. However, his charges were dismissed and he received more than $100,000 in damages from Baton Rouge police. One police officer filed a counter-suit, however, claiming protesters had thrown rocks at him and that McKesson had incited the violence. That was the suit that Pirro referenced earlier this fall on Fox and Friends. I don’t see McKesson’s suit sticking here.

“In this particular case, DeRay Mckesson, the organizer, actually was directing people, was directing the violence,” Pirro stated. “You’ve got a police officer who was injured, he was injured at the direction of DeRay Mckesson, DeRay Mckesson walks away with a hundred thousand dollars, for an organization that is amorphous, we got a problem in this country.” McKesson is one of the leaders of Black Lives Matter and he’s certainly no saint. Pirro is a tigress when it comes to the law… I almost feel sorry for the dolt.

His lawsuit states that Pirro knowingly lied about him on Fox. He’s basing his claim on the police officer’s suit which was dismissed before Pirro made her comments. Fox is vowing to fight the suit. “We informed Mr. McKesson’s counsel that our commentary was fully protected under the First Amendment and the privilege for reports of judicial proceedings. We will defend this case vigorously,” Fox News told TMZ. 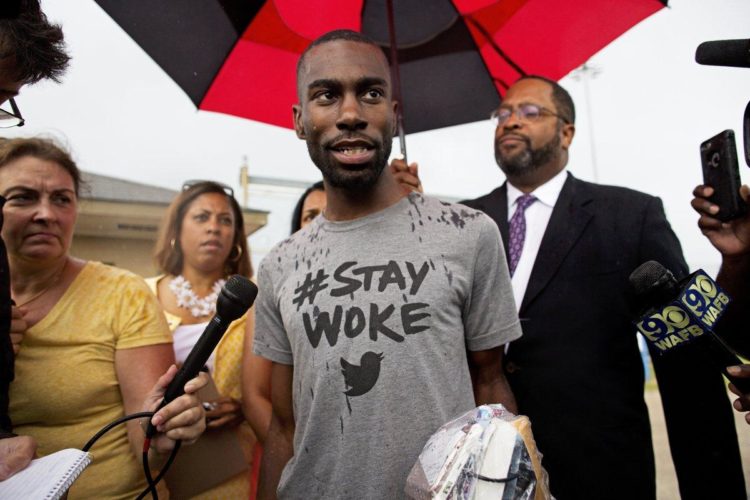 Black Lives Matter activist DeRay Mckesson talks to the media after his release from the Baton Rouge jail in Baton Rouge, La., in July 2016. (MAX BECHERER/AP)

The officer’s original lawsuit named both McKesson and Black Lives Matter as defendants. The judge tossed it stating that BLM was a movement and not an organization and therefore could not be sued. The judge also said the officer did not put forth enough evidence that McKesson had directly incited violence against him. Pirro will not come unprepared. She is a professional barrister with the full weight of Fox News backing her up. This time Goliath is going to crush McKesson.