‘Black Lives Matter’ Riots All Over London, With Police And Public Being Assaulted! [VIDEO]

For those of you[1] that thought Black Lives Matter had faded into the background. Nope… they are still rioting and hurting police officers. In London, they threw bottles, Molotov cocktails, fireworks and anything they could get their hands on at police after the death of alleged drug dealer Rashan Jermaine Charles. He was black. I wonder if he was Muslim.

Rashan Jermaine Charles, 20, fled the police on the 22nd and swallowed his stash of drugs as he ran. The police caught him and it is unclear whether he died from a drug overdose or an encounter with the police. My bet is the drugs. After his death, Black Lives Matter started rioting. They set fire to garbage bins and mattresses. They attacked the police… aggressively. They destroyed stores and painted graffiti everywhere. It was a mess. Hackney police tweeted: “Officers have been subjected to abuse [and] violence. Whatever the frustrations, this is patently NOT what the family of Rashan Charles wanted.” 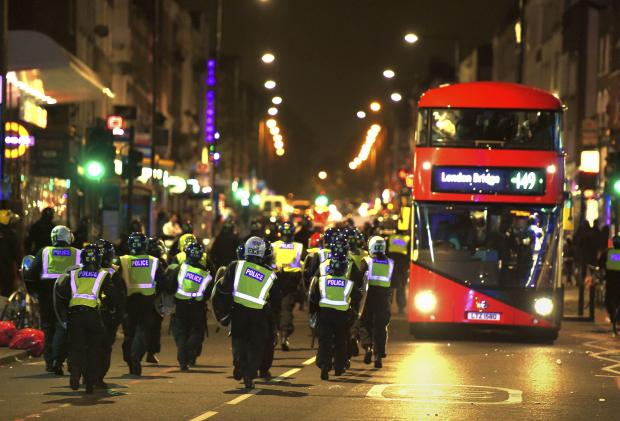 Molotov cocktails, fireworks, and bottles have been hurled at police during a ‘Black Lives Matter’ riot in East London following the death of an alleged drug dealer.

Rashan Jermaine Charles, 20, died in hospital after being apprehended by police in Dalston, Hackney on the 22nd of July. He was attempting to flee a shop while swallowing a stash of drugs when tackled by officers, according to reports[4].

The protest began at around 4 pm yesterday. Approximately 80 people gathered outside the shop where Charles was arrested. Things turned violent as the sun went down and continued into the night. Police horses and vans were called in. Officers stormed barricades and fought hand to hand with rioters. The police line forced back crowds multiple times. One witness said, “There’s lots of police here, about 10 to 15 riot vans. Maybe 50 or 60 bottles or other missiles have been thrown. The police line is being slowly pushed back by the protesters. There’s lots of very angry people.”

Rioters targeted drivers. They jumped on one truck that crashed through one of their barricades. People barricaded themselves in their cars and stores in sheer terror as these thugs raged. Rioters told drivers they were not allowed through. One resident spoke about trying to get through the rioters, “They are telling drivers they are not allowed through the blockade. I ended up driving right through it as I was cornered in the car and didn’t want to U-turn as two groups of gang members appeared on either side of my car which frightened me. Straight ahead was a better option. Helicopter is now overhead and traffic is at a standstill. Mopeds are in road and masks are on their faces.”

Sounds to me like Muslims have joined forces with Black Lives Matter thugs in London. These animals are all over the place there now and they are extremely dangerous.

A lorry drove through a barricade made by protesters angry at the death of Rashan Charles amid violent scenes in east London pic.twitter.com/OR9QtP92XY[6]