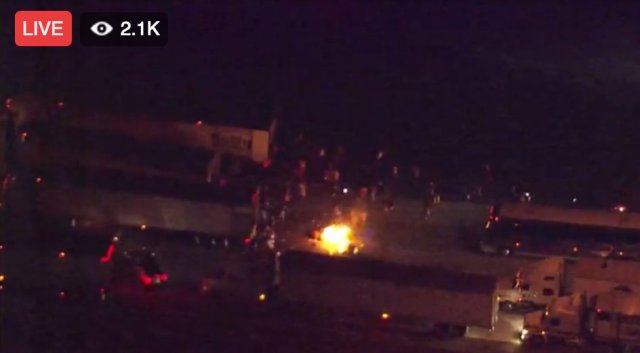 There’s nothing wrong with protesting a perceived injustice. One of our most cherished American rights is the right to peacefully assemble — to protest. However, that’s often not what happens when Black Lives Matter activists set out to make a statement. Too often, they don’t understand what the words “peaceful protest” mean. That was proved true once again in North Carolina last night, when a Black Lives Matter mob descended upon a highway[2] and began attacking people.

The rioters began by throwing rocks at cars and trucks, protesting the shooting of a black man on that same highway.

But it quickly became dangerous, when the mob ambushed a female truck driver. She was trapped in the truck as the rioters looted her truck, stealing the goods and lighting them on fire, all while she was inside. She called police, but they never came. Instead, a media chopper got footage of the violence.

????Try & picture Collapsing Hillary Clinton getting out of bed to deal with Chaos & Violence in N.C #KeithLamontScott[8] pic.twitter.com/KAVPlHmWPb[9]

It didn’t stop there, though; by the end of the night, 16 police officers were injured and the freeway had been shut down.

Message to these Black Lives Matter protesters: this doesn’t help your cause. Protesting the killing of a black man at the hands of police is a valid thing to do. Shutting down a freeway, throwing rocks at cars, attacking an innocent truck driver and injuring 16 police officers is not. That’s not a protest; it’s a riot. And it doesn’t endear anyone to the Black Lives Matter cause. It makes racial division worse and inflames racial tension. That doesn’t fix anything.

Martin Luther King, Jr. encouraged people to use love, hope and integrity to make a difference when he was fighting for civil rights. It’s shameful to see the Black Lives Matter movement literally doing the exact opposite. Instead of love, they spread anger and hatred and intolerance. They encourage black people to see themselves as perpetual victims and white people as racist oppressors. How they are able to look at themselves in the mirror without feeling deep shame for their actions is truly beyond comprehension.