I watched both shootings[1] of black men play out yesterday and I have something to say about each of them here today.

The shooting in Tulsa[2], where I live, is being portrayed as a white cop shooting an innocent black man. Not quite. Terence Crutcher has a rap sheet a mile long. He had been arrested at least 12 times previously. They found PCP in his stalled SUV. What the media would have you believe is that he was just standing by his stalled car when the evil cops showed up and shot him while he had his arms raised. He was indeed unarmed, but as you will see in the video below, he was walking with his arms and hands raised after being told repeatedly to stop by the police. He kept on going until he got back to his car and then he started to reach in the window for something. That is when a white, female officer shot him fatally. His attorney is claiming the window was up when he arrived… it is pretty clear that the guy was reaching inside that vehicle when he was shot.

Two officers fired simultaneously – one a taser and one a gun. It was a justified shooting – he was not shot with his hands up[3]. From my viewpoint, the officer followed procedure. Was she supposed to wait and see if he pulled a gun and fired on them before shooting the guy? No, that is not how they are trained. The guy was not obeying commands and he looked high to me. Hundreds showed up in Tulsa last night to protest… it was Black Lives Matter again. Originally, people said he was a pastor… not true, he was a criminal and the officers acted in a way to protect themselves as a last resort.

Now, onto North Carolina[4], where the black man was armed, shot and killed as well… by a black police officer. 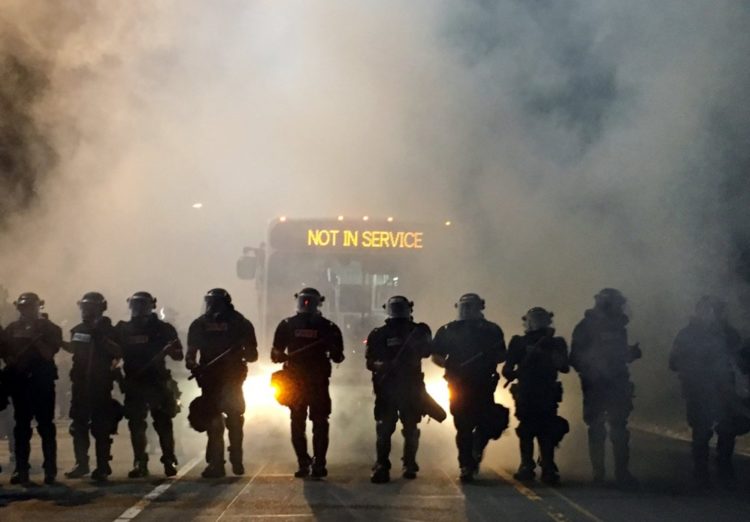 Protests erupted in Charlotte, North Carolina Tuesday after 43-year-old Keith Lamont Scott was shot and killed by a police officer.

The man was reportedly shot by a black officer.

Protesters attacked police, hit a reporter in the head with a rock and trashed a police cruiser.

The shooting occurred around 4 p.m. at The Village at College Downs apartment complex in northeast Charlotte.

According to WBTV[6], officers said they were searching for a person with an outstanding warrant when they saw a man get out of a vehicle with a firearm.

Lamont Scott got out of the vehicle “armed with a firearm and posed an imminent deadly threat to the officers who subsequently fired their weapon striking the subject.”

Twelve police officers were injured last night as hundreds of Black Lives Matter protesters rioted and looted after Keith Lamont Scott was shot and killed by a police officer in Charlotte. His daughter is circulating a video claiming he was innocent of course… a father of seven, reading in his car and waiting for his son to get home from school and that he was unarmed. That’s touching, but it’s not reality according to the police and just as in Tulsa, I’m far more willing to believe the police here than BLM.

According to officers, they were looking for a suspect when they came across Scott in his car. They were in plain clothes and ordered Scott out of his car. He got out with a gun and then got back in. He got out a second time still with his gun in hand and they took him down because he was an armed threat. A gun was recovered from the scene.

Several hundred rioters went to town last night in Charlotte. They threw bricks and water bottles at the police. The police lobbed tear gas at the rioters. The BLM asshats stole cargo off trucks and set fire to it in the middle of the street. They tried to loot a Walmart and were pushed back by police. They destroyed two police vehicles and assaulted the media. They set trucks on fire as well.

“We out like the Taliban![7]” one rioter could be heard crying on a Facebook Live broadcast of the protests, shortly after tear gas canisters were fired into the crowd. After 11 pm, the situation grew more severe, with several people successfully trashing a police SUV.

The police also used flash grenades to disperse the crowds. I didn’t see any, but I’ll bet pepper spray was used as well. Some protesters were heard yelling ‘Black Lives Matter!’ and ‘Hands up, don’t shoot!’. They held up a sign saying ‘Stop Killing Us!’ and ‘It was a book!’, making reference to the object Scott was reportedly holding when he was shot dead.

Officer Brentley Vinson – a former college football player – was identified as the officer who shot Scott, WCCB[8] reports. Officer Vinson, who has worked at the department since July of 2014 and is also black, has been placed on paid on administrative leave, as is standard procedure in such cases.

What you are seeing is a ginned up race war with cop-hatred for fuel. Both of these incidents were justified and the police were doing their jobs. If you do not obey a police officer repeatedly, you are going to get shot. If you have a gun and brandish it at them, you are going to get shot. Black Lives Matter is a radical, racist terrorist group and its members should be treated as such.

For context, the shooting of Terence Crutcher: 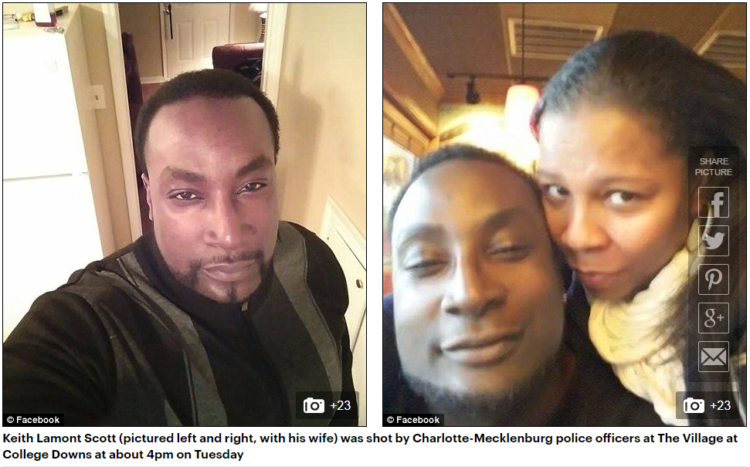 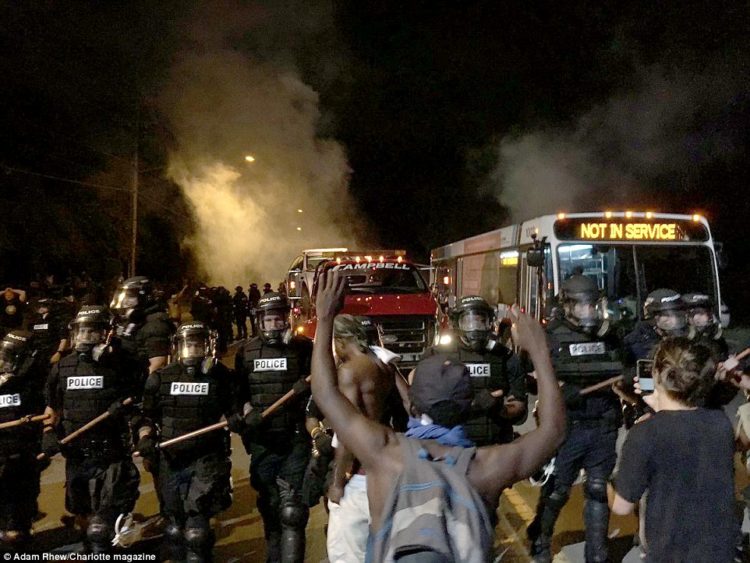 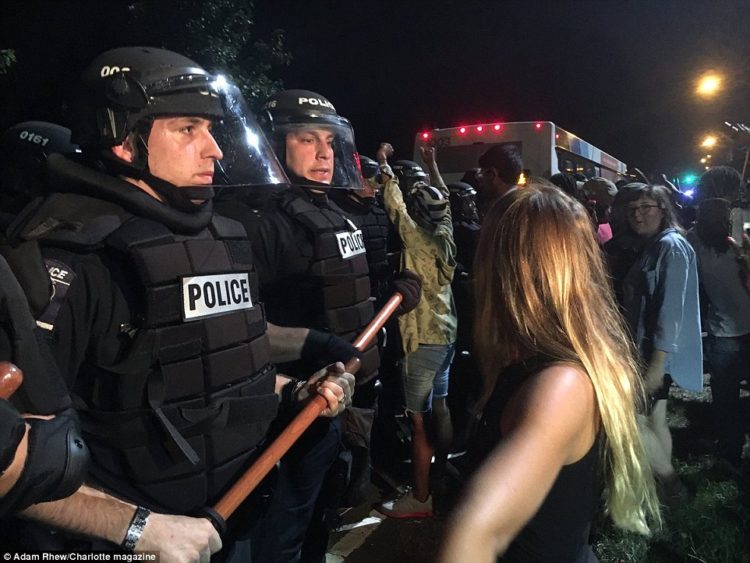 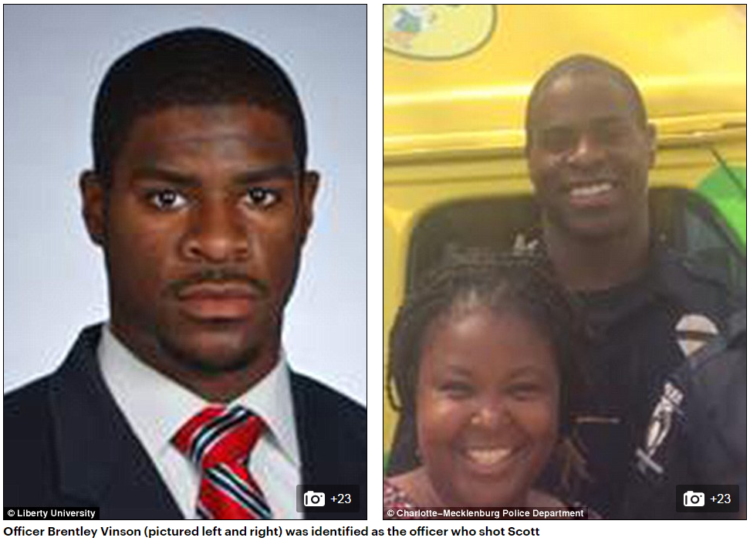 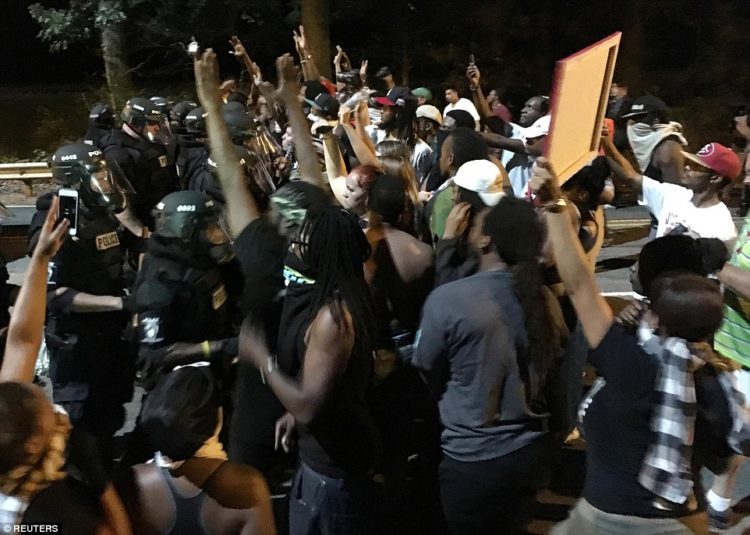 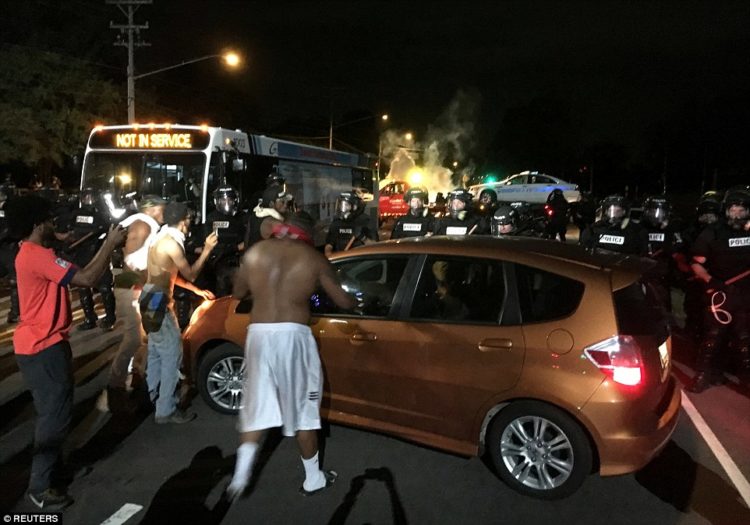 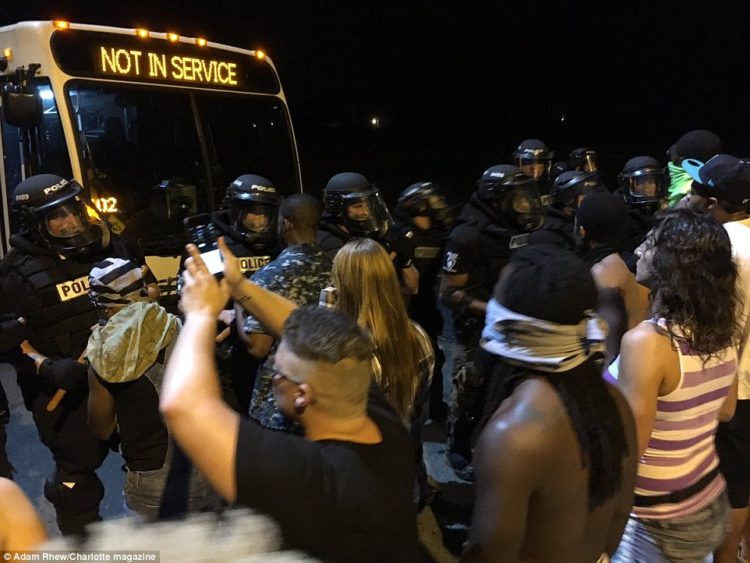 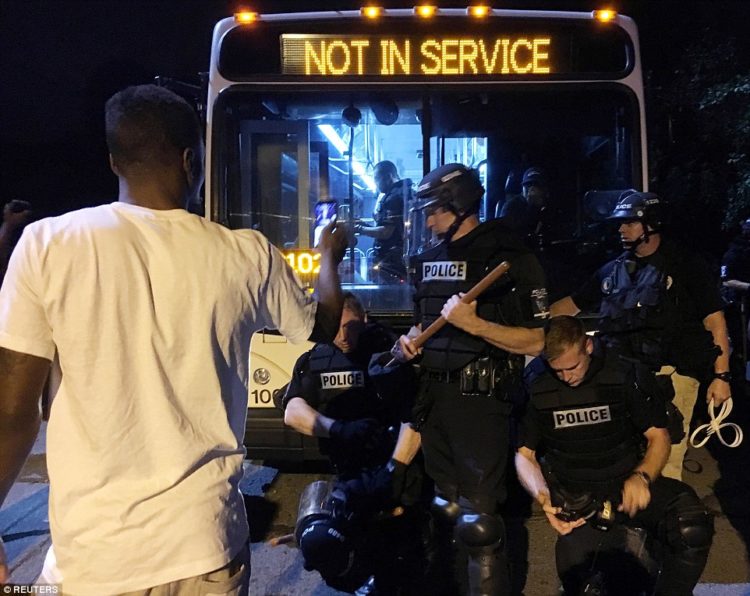 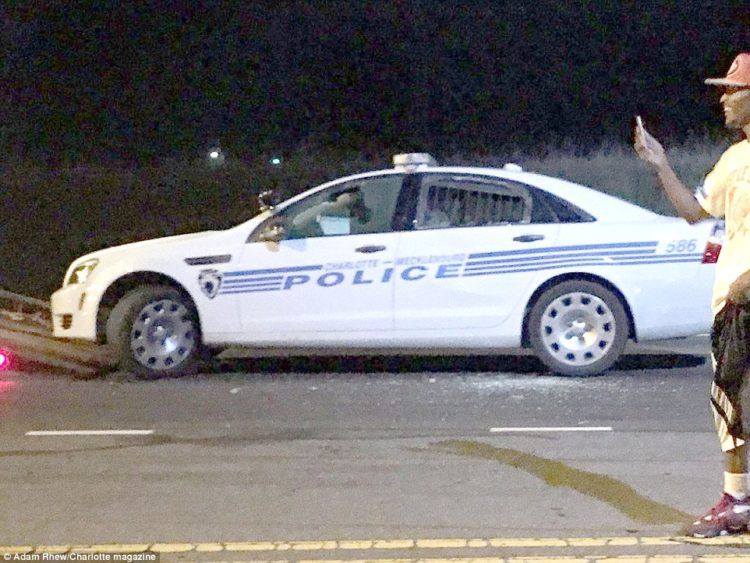 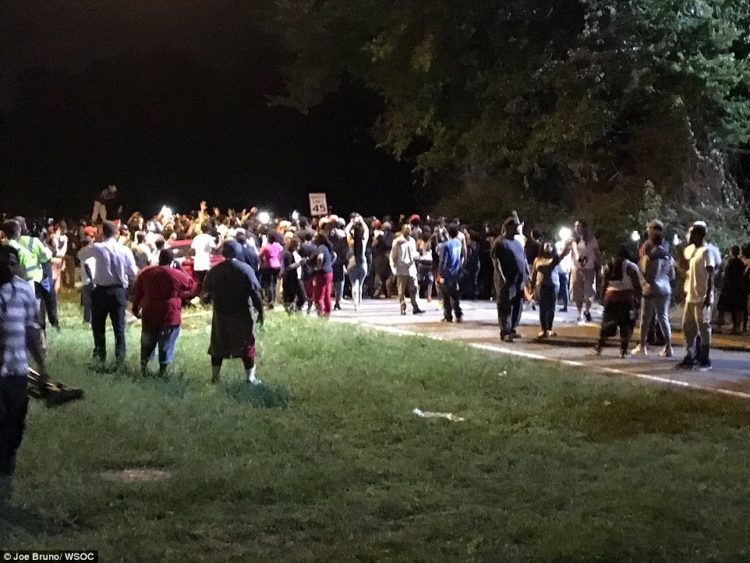 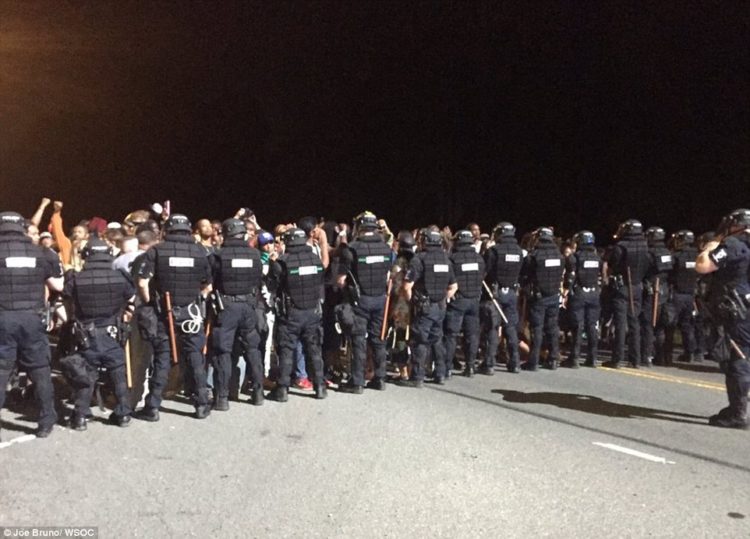 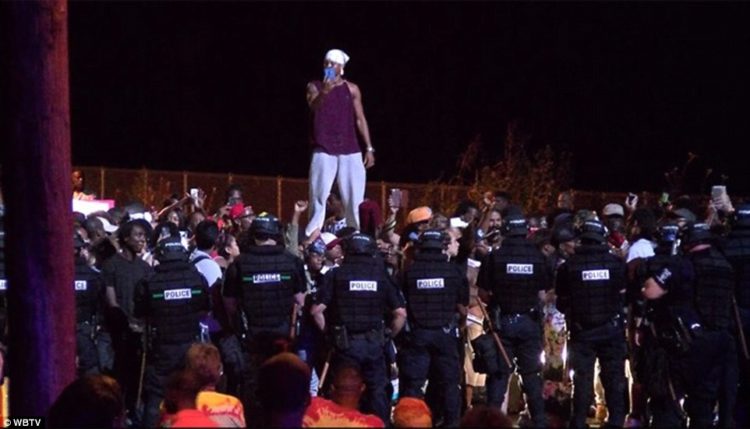 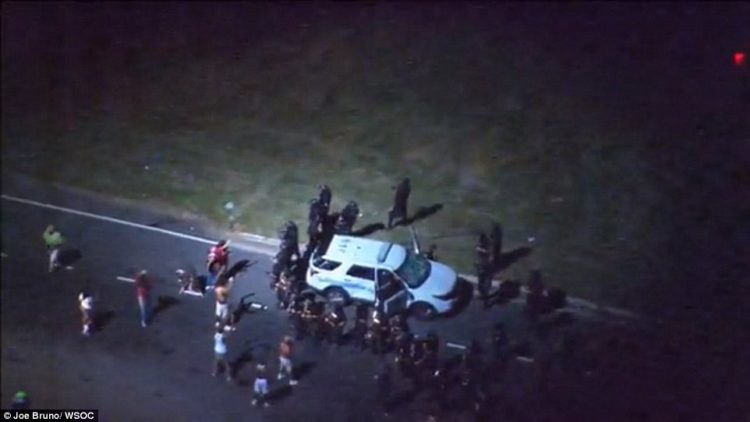