What Happened After Black Lives Matter Showed Up At Pro-Trump Rally – No One Saw Coming! [VIDEO]

From the beginning, I have considered Black Lives Matter to be a domestic terror group. That does not mean that every person in the movement is bad… it simply means that their overall goals are militantly racist and are meant to create mayhem and terror. But sometimes, even I get surprised. In Washington, DC over the weekend, Trump supporters once again faced off against Black Lives Matter protesters. But this time, some good came of it for a change.

During the rally, a Black Lives Matter group were originally marching close to the stage and chanting “Black Lives Matter!” They received jeers, boos and catcalls from the Trump supporters. At first, the speaker, who was the organizer of the rally yelled out to Trumpsters, “Don’t give them the spotlight” and “They don’t exist.” Suddenly, everything changed when another organizer made an about-face and shouted, “I’m going to let Black Lives Matter come up here while I show them what patriotism is all about, all right?” 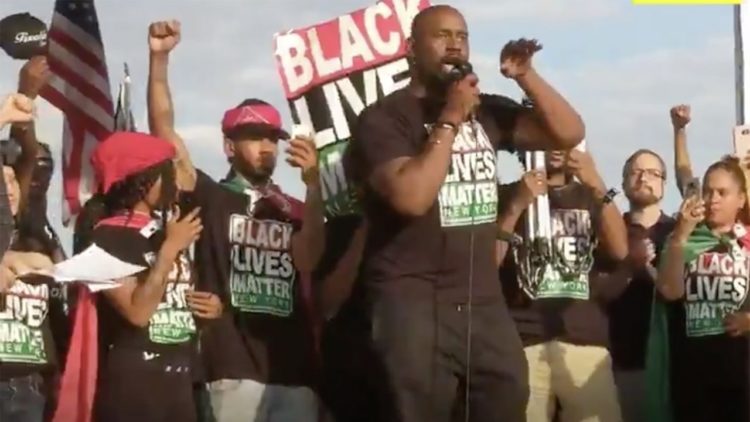 Normally, I would have thought that would lead to fighting, but I would have been wrong this time. Another speaker said, “[This rally is] about freedom of speech. It’s about celebration. So what we are gonna do is not something you’re used to, and we’re going to give you two minutes of our platform to put your message out. Now, whether [the crowd disagrees or agrees] with your message is irrelevant — it’s the fact that you have the right to have the message,” he said. And that is exactly what free speech is all about.

Black Lives Matter members took the stage and their leader began to speak. Both sides cheered him… BOTH SIDES. “I am an American,” the Black Lives Matter group leader said. “And the beauty of America is that when you see something broke in your country, you can mobilize to fix it.” He went on, “So you ask why there’s a ‘Black Lives Matter?’ Because you can watch a black man die and be choked to death on television, and nothing happened. We need to address that.” On that point, he’s exactly right. What I have an issue with is what the person did to wind up in that scenario to begin with.

These Black Lives Matter activists were invited on stage at a pro-Trump rally – and every American needs to hear what they said pic.twitter.com/m69yvgiQtw[2]

The crowd was not thrilled with that message and there were cries of “No!” People began yelling for the group to be removed from the stage. The BLM speaker said they were not anti-cop, but no one believed that statement. However, the leader rephrased what he had said and stated that they were “anti-bad cop.” He said they didn’t want any handouts and only what was rightfully theirs. “We want our God-given right to freedom, liberty, and the pursuit of happiness!” the group’s leader shouted and the crowd began to applaud and cheer once more. When the message shifted, the crowd shifted as well.

Then the BLM leader said something I did not expect. He said, “All lives matter, right? … If we really want to make America great, we do it together.” And the crowd went wild and began chanting “USA! USA!” Because of a small change in the way BLM put forth their message, big things happened and they found support in the strangest of places. When the BLM leader was done speaking, he told a nearby cameraman that his experience in speaking to the pro-Trump crowd “restored my faith in some of these people.” And their faith in some of his people was restored as well.

“When I spoke truths, they agreed,” he said. “I feel like we made progress. I feel like two sides that never listen to each other actually made progress today.” The BLM leader went on, “I expected to come down here with my fist in the air in a very militant way, and to exchange insults … if not on a grander level, and just person-to-person, I think we really made some substantial steps without either side yielding anything. I hope that they understand that one of the leaders of the Black Lives Matters movement is a proud American and a Christian who cares deeply about this country,” he said. “We really are here to help this country move toward a better place, not to destroy it.” In the end, that is what all of us want.

The guy was approached by a lot of people after his speech who agreed with him and wanted to take photographs with him. He said, “That’s the power of communication. We came out, we were gonna chant, we were gonna do a demonstration, but we didn’t have to — we just spoke,” he said. “It worked. I’m happy about that.” And for the first time in a very long time, I have a little bit of faith restored and I have hope that we may just survive all of this crap after all.