NO, IT’s NOT RACISM: BLM activist SHUT DOWN after shocker confession in murder case

A black man in Queens[1], got angry because a 30 year-old white woman jogged by him. He said, “I don’t like those people over there” and used that as his justification for assaulting, raping and beating a woman to death. He says he has a bad temper and things were bad at home, so he took it out on a white woman. Shaun King, who works for the New York Daily News, labeled his employer as racist for their cover showing the young woman who was murdered and her assailant with the title: ‘Demon In The Weeds’. King took exception with the guy being called a brute and a demon. But that particular shoe fits perfectly on this guy.

King was the guy that so vehemently defended the thugs of Black Lives Matter. He also insists he is black, when in fact, he’s white. He didn’t condemn the dirt bag for beating and raping the woman. Or for even killing her. He’s upset by the names the murderer is being called and King is saying it’s racist. What delusional, racist bull crap. Chanel Lewis confessed to the murder, but he would only confess to a black detective about what he actually did to Karina Vetrano. He didn’t know her, but he really got off on killing her. He did two video confessions detailing the crime, but he would not admit to the rape. There is no doubt by the way, that he did indeed viciously rape her. 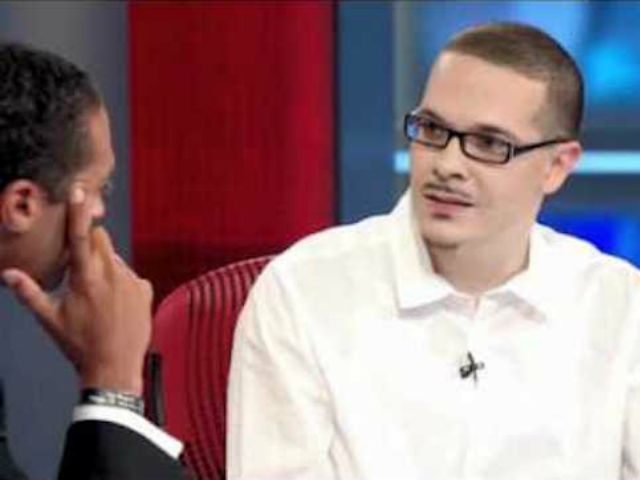 The murderer of a 30-year-old jogger in Queens, New York indicated he killed the woman because she was white.

“I don’t like those people over there,” confessed killer Chanel Lewis, 20, told a black detective, the New York Post reported[4].

Lewis refused to talk to a white detective but when black detective, Barry Brown, interviewed him he waived his miranda rights and gave two videotaped statements.

Brown is regarded as “best detective in Queens for getting confessions,” sources told the Post.

He told the detective that he was angry and took it out on Karina Vetrano in Aug. 2013 as she jogged by him.

“I was angry. I had some issues at home. I just lost it. When I saw her, I just hit her and kept hitting her. I hit her and choked her,’’ he said, according to the Post.

The accused murderer gave “very detailed, incriminating statements” where he described “each step of the assault,” NYPD Chief of Detectives Robert Boyce said at a news conference.

Lewis’ DNA was found under Vetrano’s fingernails, on her back and on her cellphone, Boyce told reporters.

“The perp said he had a bad temper. He confessed on video about the assault specifically. He did not want to admit to the rape,” a source close to the investigation told the Post.

It’s obvious that Lewis hates women and white people. He said he had a fight with family members on the day of the murder and went to Spring Creek Park to cool off when he spotted Vetrano and took it out on her. To defend Lewis, King wrote a rambling, incoherent 1500+ word essay. In one of the very few paragraphs where he actually addresses the headline, King states: “By calling Chanel Lewis (the suspected killer) “a demon” and “a brute,” the headline devolved into language that has been used to dehumanize and even lynch black men in America for the past century.” Last time I looked, I don’t remember black people being lynched all over the place. However, I do know that thousands lose their lives every year in Chicago. His perception of reality is massively skewed.

I find nothing wrong with the headline from the New York Daily News. In fact, it is appropriate. This guy is nothing less than an evil demon. What he did to that poor woman is monstrous. The fact that King only cares about the perceived racism of the whole event is moronic in the extreme. Lewis is inhuman… he’s a violent killer who happens to also be a stone cold racist. It’s revealing that King would rather defend a killer for his race, than a murdered woman for hers. He only recognizes hate crimes against blacks and only when committed by whites. 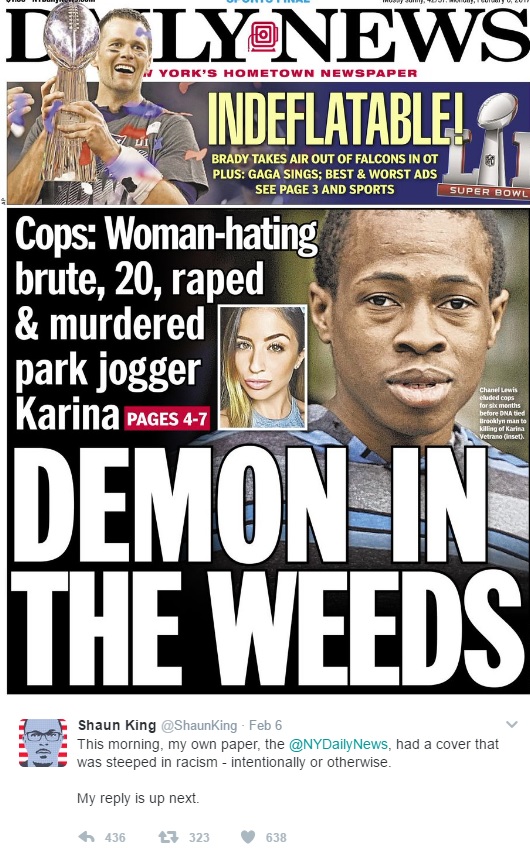