I usually don’t laugh[1] at people’s misfortune… I consider doing so a sign of a deficient character. But this one actually made me smile. In Ontario, a Black Lives Matter moron ran up to a police horse and slapped it. Instantly as she turned to run, the horse kicked her. She went face first into the pavement, got up and ran off holding her bloody (probably broken) nose. That’s karma and it was epic.

What kind of evil asshat hits a horse? Three people were arrested in Ontario that day for hitting police horses. They have all been charged and if convicted could get five years in jail. I hope the judge throws the book at them and they get the maximum sentence. Horses are noble animals and to hurt one is just plain wicked. They were hitting the horse because they were too cowardly to hit the police officer. That says a lot right there. 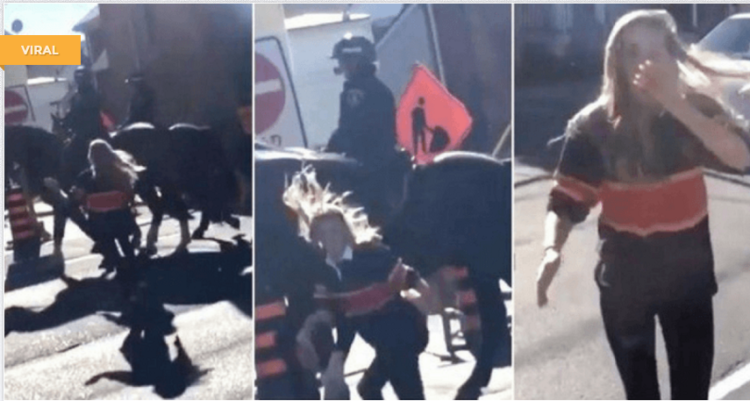 Stupid is as stupid does. And a Black Lives Matter protestor realized how stupid she really is after she slapped a police horse.

The horse immediately kicked her. She fell flat on her face and then ran away holding her nose. That’s instant karma! What kind of a heartless jerk hurts a horse?

You can see the immediate street justice in the video below.

This happened at Queen’s University in Ontario. Three people were arrested for smacking a police horse that day. They face up to five years in jail if they are found guilty. That should make anyone think twice before trying this!

These people are shallow and deeply, deeply stupid. I’ve heard of these deviants punching horses in the snout over this. It has become a thing evidently. They’ll never do it, but police should be given the green light to shoot whoever does something like this. It would soon stop.

These terrorist acts are committed by pathetic, triggered students. Police have not confirmed that this ditz is one of the three hooligans that has been arrested in multiple horse-slapping incidents at Queens’ homecoming in Kingston, Ontario. We do know that one woman and two men were charged with injuring a law enforcement animal. Police in Kingston said their female horse Murney, a new member of the police force, was slapped three times.

Though the police horse kicked the BLMer in the above video, Kingston police said their horse Murney was “startled by slaps, but kept her restraint,” not bucking or running off. Why anyone would hurt a horse is beyond me… further, why anyone would hurt a police animal and risk getting shot is even more beyond me. We live in the age of idiots.