If liberals didn’t see this one coming, they are even bigger idiots than I thought. At The College of William & Mary, Black Lives Matters shut down an ACLU Free Speech event. Why? Well, because “liberalism is white supremacy.” This is sheer racism which is what Black Lives Matter has been all about form the beginning… that and communism. They derailed an event hosted by the ACLU. It was ironically entitled: “Students and the First Amendment.” Considering how they’ve tried to silence conservatives, I find that rich. ACLU staffer and W&M alumna Claire Gastañaga was behind the event.

The event was live-streamed by the student group to cover their protest on Facebook. Students stormed the stage just after the lecture began. For about twenty minutes they chanted, drowning out the speaker, Claire Guthrie Gastanaga, the executive director of the ACLU of Virginia. “ACLU, you protect Hitler, too,” “the oppressed are not impressed” and “shame, shame, shame, shame” were among the chants used by the protesters. In addition, they chanted “the revolution will not uphold the Constitution,” and “Liberalism is white supremacy.” These are racist communists that want to destroy the Constitution and our Republic. 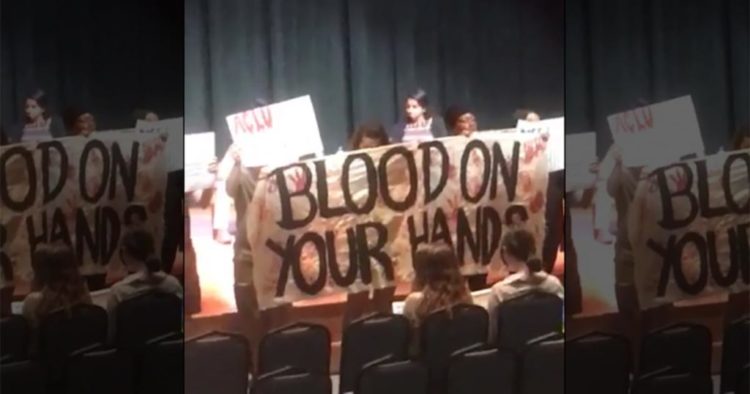 These asshats were protesting the ACLU’s decision to defend the Charlottesville rally that took place on the University of Virginia’s campus in August. Can’t have free speech if it disagrees with you, now can we? Except that is what free speech is and the First Amendment is specifically designed to protect speech we don’t like. The organizers of the event eventually pulled the plug after twenty minutes of chanting. I don’t blame them. But BLM should have been arrested for at least disturbing the peace here and more appropriately, inciting violence.

The college issued a statement that read in part that “silencing certain voices in order to advance the cause of others is not acceptable” because it “stifles debate.” You forgot the word ‘fascist’.

More from the college:

William & Mary has a powerful commitment to the free play of ideas. We have a campus where respectful dialogue, especially in disagreement, is encouraged so that we can listen and learn from views that differ from our own, so that we can freely express our own views, and so that debate can occur. Unfortunately, that type of exchange was unable to take place Wednesday night when an event to discuss a very important matter – the meaning of the First Amendment — could not be held as planned. …

Silencing certain voices in order to advance the cause of others is not acceptable in our community. This stifles debate and prevents those who’ve come to hear a speaker, our students in particular, from asking questions, often hard questions, and from engaging in debate where the strength of ideas, not the power of shouting, is the currency. William & Mary must be a campus that welcomes difficult conversations, honest debate and civil dialogue.

This statement is toothless and pretty much meaningless. If you aren’t going to stop those who actively silence others from having free speech, then by definition, you no longer have free speech. Liberalism is not white supremacy, but there’s an argument to be made that Black Lives Matter is black supremacy. Oh, yes it is.