GAG! California Secession Movement: ‘Our Values Are Different’ Than The United States [VIDEO]

Part of me[1] wants to tell California to go for it if they truly want to secede. But that is never going to happen. Despite what the CalExit movement may think or protest, the Golden State is part of the United States by law. They can’t just go to the UN and declare they are their own country. We have military bases there and the coastline is strategically important to the U.S. Should they actually get enough moonbats to support this, then it would be time to send the National Guard in and take control of the state.

Tucker Carlson took on one of the leaders of the CalExit movement, Shankar Singram. He can say their values are different than ours all he wants and claim to disregard our laws as a nation, but in the end, he won’t get a say in that. And that is the actual reality here. It will be interesting to see if Californians actually vote for this. I doubt they will, but then again, it is the land of fruit and nuts. If I were President Trump, if this does get voted for, I would view it as an uprising and act accordingly. 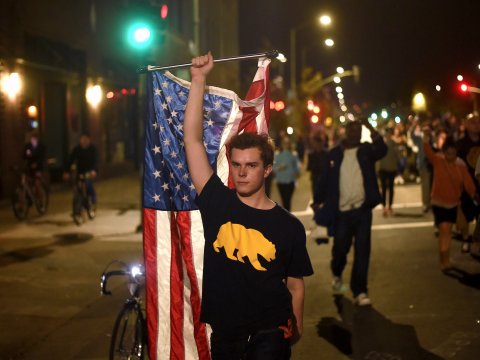 A leader for the CalExit movement told Fox News Channel’s Tucker Carlson that California is not part of the United States and it’s time to formalize that reality.

“This is California. We’re not the United States. Our values are different,” said Shankar Singram, vice president of the California Freedom Coalition[3]. “We’re fundamentally different in how we act and speak and think about the world globally. Whether it has to do with war, the climate, the environment. We’re just a different state.”

He added, “We are going to do things that are beneficial for our state, and we disregard what the United States thinks or even their laws,” pointing to sanctuary cities and marijuana laws as examples where California is currently defying the feds.

As reported by Western Journalism[4], Californians may soon get the opportunity to vote to secede. The state’s attorney general, Xavier Becerra, issued an official ballot measure title last week allowing CalExit supporters to start gathering the 585,000 signatures needed to place the matter before California voters in 2018.

“The initiative [titled ‘California Autonomy From Federal Government’] would form a commission to recommend avenues for California to pursue its independence and delete part of the state constitution that says it is an inseparable part of the U.S. The measure would also instruct the governor and California’s congressional delegation to negotiate more autonomy for the state,” according to the Associated Press. Great… so say they vote for that… it’s illegal and there will be repercussions. Count on it.

You can’t just vote on it and decide to break up the U.S. and remove a star from our flag. It doesn’t work that way. Congress would have to approve of the secession and that is never going to happen. “It’s not actually up to California. It’s up to the rest of the states whether California can really leave the union, and this could quite easily turn into conflict,” said Carlson. “It did in the 1860s when South Carolina tried it.” Exactly right. And it would not end well for these idiots.

Marcus Ruiz Evans, a spokesman for the CalExit initiative told reporters the Supreme Court has already recognized the right of states to secede in Texas v. White (1869), though the justices actually held states do not have the right to secede unilaterally. These morons think they would do just fine on their own. They are bankrupt right now. Can you imagine the third-world hellhole that California would turn into if it cut itself off from the Union? The state is ginning up conflict and whether they secede or not, DC may be forced to step in here.