Things have not been going well for residents of the erstwhile Golden State, now that they’ve gotten the rain they wanted:

Nearly 200,000 remain under evacuation orders Tuesday as California authorities work to repair an emergency spillway at the nation’s tallest dam before more rain arrives on Thursday.

In an unrelated incident in Sacramento County, residents from about 20 homes in the Tyler Island area south of Walnut Grove were ordered to evacuate Monday due to a compromised levee, reports the Sacramento Bee.

Meanwhile, at Lake Oroville, one of California’s largest man-made lakes, water levels reached a level so high Saturday that an emergency spillway was used for the first time in its 48-year history.

Although the threat was easing somewhat Monday, crews continue to frantically work to repair damage to the spillway as more rain is expected later in the week. …

For days, officials reassured residents along the Feather River, saying there was no danger. That is until water began spilling over the emergency spillway Saturday, chewing through the slope below.

Then came the evacuation order, and the ensuing chaos.

Gov. Jerry Brown said Monday that he sent a letter to the White House requesting direct federal assistance in the emergency, though some federal agencies have been helping already.

Despite Brown’s previous vows to resist working with the Trump administration, the governor said at a news conference that he’s “sure that California and Washington will work in a constructive way. That’s my attitude. There will be different points of view, but we’re all one America.”

At least it is when California — which is on the verge of becoming a sanctuary state in seditious abrogation of federal law — has its hand out for federal money.

Meanwhile, Governor Moonbeam and the other leftist kooks in charge are flushing a staggering $10 billion down an unneeded high-speed rail project, on top of the still more staggering $25.3 billion per year they spend on the illegal aliens they have gone out of their way to welcome. Building more reservoirs, so that California is not in crisis every time it rains or does not rain, would no doubt be offensive to the environment.

If a nation as rich in resources as Venezuela could become a basket case thanks to leftist rule, so could California. Its residents should pray that Calexit never happens. 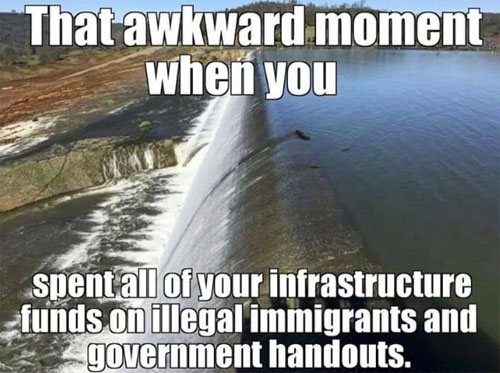 On tips from Bodhisattva, Rob E, and Torcer. Cross-posted at Moonbattery.