This looks very, very bad[1] for the Catholic Church. Evidently, it’s been going on[2] for 2 years and now they will stop it. It certainly is not a Christian thing to do in my viewpoint. And during a severe drought, it is very wasteful of water. A more humane thing to do and probably cheaper in the long run, would be to install an iron gate that is locked at night and opened in the morning. That way, the homeless could not camp out in the alcoves. Many churches in New York do this. The homeless problem has exploded across the country thanks to Obama and Progressive policies that acerbate the problem. Over a decade ago, then-Mayor Gavin Newsom[3] promised that in 10 years the homeless problem would be no more in San Francisco. His solution was to give them money and entitlements. Now the homeless population is at a minimum double what it was and more likely, triple. They spent $1.5 billion to not solve the problem. Way to go Liberals. 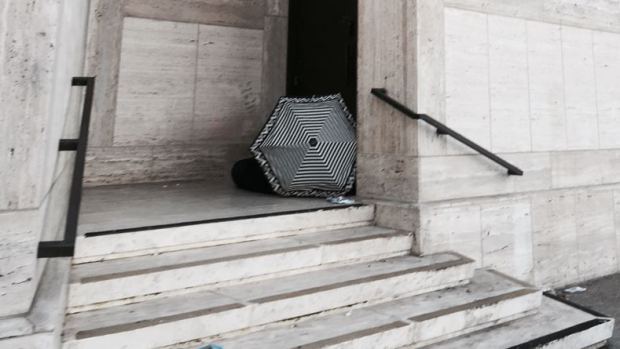 A San Francisco Catholic church has reportedly installed a “watering system” that discourages homeless people by drenching them as they sleep.

KCBS reported[4] that the “no trespassing” signs outside the primary church for Archdiocese of San Francisco, Saint Mary’s Cathedral, did not mention what would happen to the homeless who tried to sleep under the cover of the building’s doorway.

At random times throughout the night, “[w]ater pours from a hole in the ceiling, about 30 feet above, drenching the alcove and anyone in it,” the station noted. “The shower ran for about 75 seconds, every 30 to 60 minutes while we were there, starting before sunset, simultaneously in all four doorways. KCBS witnessed it soak homeless people, and their belongings.”

A homeless person named Robert told KCBS that people continued to risk their own health by sleeping under the shower.

“We’re going to be wet there all night, so hypothermia, cold, all that other stuff could set in. Keeping the church clean, but it could make people sick,” Robert explained.

A neighbor pointed out to KCBS that the watering system was not only an “inhuman” way to treat people, it also was a waste of water during a serious drought.

Cathedral staff confirmed that the system had been in place for about a year, and that it was intended to discourage homeless people from seeking shelter in the church’s doorway.

“We do the best we can, and supporting the dignity of each person,” Archdiocese spokesperson Chris Lyford said. “But there is only so much you can do.”

You know how Utah is handling their homeless problem and winning at it? They put them in apartments[5] and get them into jobs immediately. They have to start working. They are not just handed money and food. You see, if you have an actual address, it is much easier to get a job and pull yourself up. The LDS Church believes in fair exchange – we will help you if you will help yourself and others. I’m not advocating ‘entitlement homes’, I’m saying that if you want to give someone a chance, then do that. Don’t just hand them money for drugs or booze, make them earn it, but do it humanely with a chance at success.