We can always count on the California snowflakes to come through when there’s any whining or fear mongering to be done. Apparently, since Trump was elected, illegals and their families are afraid[2]. They fear that they or their illegal family members may be deported. Here’s a pro tip; if you are here legally, you have nothing to fear. If you broke into the United States by coming here illegally, then yes, you may have to face the legal consequences of that criminal behavior.

According to Kaiser Health News’ Jocelyn Wiener, “Around the country, children and adolescents who are undocumented immigrants or who have undocumented family members, are experiencing a surge in stress, depression and anxiety, according to advocates, educators and mental health providers. The same is true for young people belonging to other groups targeted by threats or hate crimes, including Muslim and transgender youth.”

Neither Ms. Wiener nor anyone else has offered any professional proof of this epidemic of stress and worry. “Reports of these mental health concerns remain mostly anecdotal so far,” she admits. But she quotes a professor at Stanford University — an avowedly anti-Trump academic named Keith Humphreys, whose political sentiments she declines to mention — who tells readers that “Muslims, Jews, Latinos, African-Americans and women and victims of sexual assault” are now, thanks to Trump’s victory and the “hateful rhetoric” attributed thereto, “uncertain whom they can trust.”

But of course, proof isn’t necessary when you are a Liberal. Your insistence that it’s true is enough, at least it’s enough for the media. But even if this stress and anxiety is occurring among these distraught youths, let’s place blame where it belongs; squarely in the lap of Liberals. Liberal elected officials, Liberal school personnel and Liberal parents have all contributed to the inability of these immature students to cope with reality. And when someone is here illegally, the reality is they don’t belong here and may have to leave. Get over it. Grow up. Understand that obeying the law matters.

Illegals have had a long run of being welcomed in and asked no questions by Liberals and Democrats everywhere. That may all come to a screeching halt when Trump takes office. If illegals don’t want their families separated, then they should stop encouraging family members to break the law. It is illegals themselves who risk separating their own families when they come here illegally. Americans are tired of the whiny Left. Laws matter. 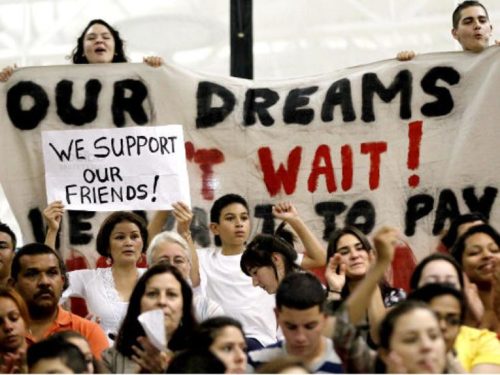