The University of California[1], San Diego may have just won the award for ‘stupidest campus in America’. But they won’t be alone for long, I’m sure. They are now clamoring for a ‘sanctuary campus’. Unfreaking believable. They are so in the tank for illegal aliens and being invaded, crime and all, that they are demanding their school give sanctuary to these criminals. I’m no fan of Trump’s, but he’s right on this issue. This is insane. Funny, those clamoring for this are communist, racist Mexican groups, who want to take over America and take it back for Mexico. Imagine that. And brain dead students just fall in line and promote this criminality. What useful idiots. 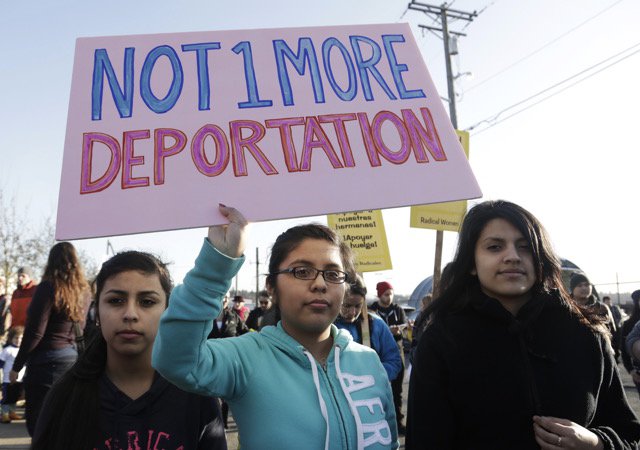 From the Political Insider:

Students at the University of California, San Diego are demanding that the Immigration and Customs Enforcement Agency (ICE) be banned in order to make UCSD a “sanctuary campus.”

Two student groups, Movimiento Estudiantil Chicanx de Aztlan and Migrant Rights Awareness, declare in their list of demands that they “stand in solidarity against the xenophobia and racism perpetuated through the ‘chalkening’ incidents that occurred at the University of California, San Diego.”

“We demand that UC San Diego become a sanctuary campus immediately, banning all Immigration and Customs Enforcement agents from collaborating with or operating within the university.”

The document condemns the pro-Trump messages, saying that UCSD cannot advocate for “equitable education” when “disruptive incidents” such as the “chalkening” continue to occur.

“This event is not an isolated incident but rather is part of a widespread phenomenon that affects both potential and current students at institutions of higher education, at UCSD, and in other institutions across the nation,” the groups write. “As a community we demand from our institution that statements that incite violence or oppress students of color are no longer tolerated, but rather are accounted for.”

Their very first demand calls for the complete removal of ICE from campus, along with a requirement that the UCSD police department sever all ties with the United States Border Patrol (USBP) and a prohibition against either agency participating in any career fair or job recruitment events hosted by the university.

“We demand that UC San Diego become a sanctuary campus immediately, banning all Immigration and Customs Enforcement agents from collaborating with or operating within the university,” the groups state.

In addition, they demand that the UCSD police department be “trained on bias within their department, and within the university as a whole, including but is [sic] not limited to racist, homophobic, xenophobic, gendered, transphobic” trends.

The students also want the school take legal action against those responsible for the pro-Trump messages, demanding “educational as well as disciplinary consequences for the perpetrators of such actions,” even though the group also claims that it is “not the intention of this movement to condemn the ability to chalk these statements.”

The ultimatum then goes on to call for specialized housing for various ethnic groups on campus, imposing a Fall 2017 deadline for the creation of permanent campus housing communities for Muslims and “undocumented” students in addition to “Multicultural Housing, Black/African Diaspora Housing, [and] Raza Interest Housing.” Each community would receive support and input from a relevant student organization, and would technically be open to all students.

More incentives and handouts for minorities who are breaking the law. Cut off the incentives, follow the law and stop this insanity. California is toast and lost. Get your kids out of these universities and away from these radicals. Internships are the way to go. Go into business for yourself. You’ll be richer and happier and communist-free.