College Crybabies Call For Investigation Into ‘Threat’ Painted On Wall

Since when is the Constitution a threat?[1] Poor little snowflakes at Ohio University evidently think it is. Their ‘triggers’ got pulled when the College Republicans wrote a message on their school’s Graffiti Wall that made fun of their safe spaces. Oh, boo hoo! Offended and terrified cry baby students immediately called for an investigation into the perceived ‘threat’. Give me a freaking break. What a bunch of woosies… these morons roll over and wet themselves at the smallest excuse. I hope the police laughed at them, but probably not. Not only that, but the tender dears are threatening real physical violence against the College Republicans now. How tolerant. 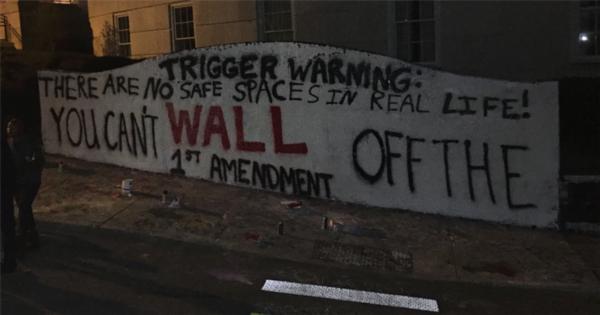 The College Republicans (CR) at Ohio University (OU) wrote a message on their school’s “Graffiti Wall” that mocked the idea of safe spaces, causing some students to demand a police investigation into the matter.

“Trigger Warning: There are no safe spaces in real life. You can’t wall off the First Amendment,” CR members painted on the wall, later claiming responsibility for the messages.

In response, one student demanded a “mandatory investigation” and another vowed to “beat the shit” out of the CR members.

“We can start w/ a mandatory investigation because trigger warning is literally a threat,” one student tweeted at her campus police department.

The police department then held an open discussion with the school’s LGBT Center after they got their offense on. The graffiti wall has become an object of controversy at OU over the past week, beginning with a pro-Trump message that was painted on the wall followed by several back and forth efforts between competing campus organizations to occupy its space. Last week, a group of anonymous students painted the slogans “Build the Wall” and “Trump 2016” on the free speech wall, requiring the involvement of OU’s president, who apologized to students who were “hurt” by the messages. Seriously? Is this college or daycare? “Indeed, this wall is a place of free speech and expression; however, the words painted were troubling because they had a very different meaning to some than they may have to others viewing the message or even those who painted the message,” President Roderick McDavis wrote in a campus-wide email. The free speech message was painted over within two hours. The Marxists just couldn’t tolerate that. Get out of that school now. 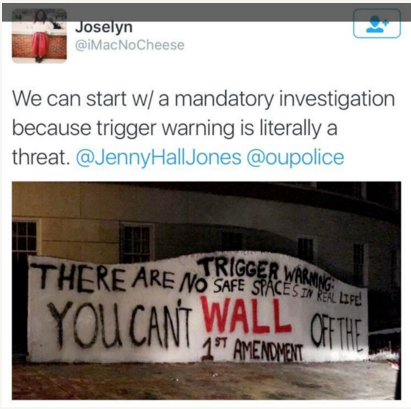 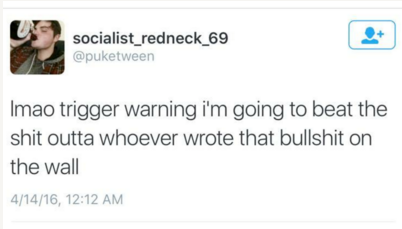