Yet another story about people who are offended by racism, being the ones actually making everything about race. They have met their competency levels and now only know how to think, act and breathe stupid. Lucky us. 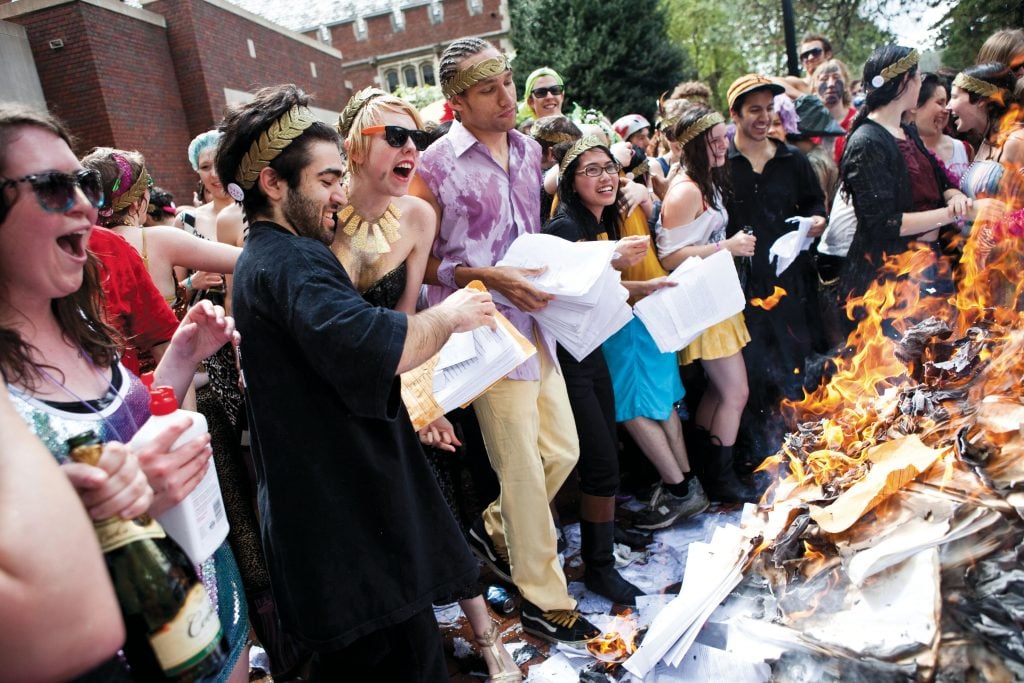 Students at Reed College in Portland, OR are throwing a freaking fit over a mandatory freshman-level literature course that is focused on the works of the Greco-Roman leaders. These are the leaders whose thinking paved the way for Western civilization and that offends their snowflake racist minds. They are deeply hurt.

Because reality does not define reality, words in a school course do.

The problem with the class for these kids? It’s just too white.

Humanities 110, covers “Greece and the Ancient Mediterranean” and it’s a course that introduces students to the works of often celebrated Greco-Roman thinkers such as Aristotle, Ovid, Epictetus and Plato. You know, some of the greats….who apparently are, racist?

For decades, this college that is private has required that their students take this class, but now there’s a problem. Students who call themselves “Reedies Against Racism” have informed the school that they demand the curriculum be “reformed to represent the voices of people of color.”

I have a feeling that people like this literally sit around in their “meetings” and seek out opportunities to be offended. When they can’t find any, they look for options that they can do their best to twist up and stretch to be offended by…

This would be one of those times[2].

During many of the lecture sessions throughout the school year, as professors were mid-way in discussion on “The Rise of Rome” and “The Nature of Things,” the students protesters from this obnoxious group would sit and stand in the lecture halls, holding up their signs stating:

“I am more than a way to get federal funding” and “We cannot be erased.”

Some of them would even put tape across their mouths to signify that they are being forced to be silent by the class taking place on Greco-Roman literature.

I know, the stupid is truly strong with this one, yes?

The outspoken minorities protesting have apparently been so prominent, the college decided to review the course this year. The result of that review, and any potential changes to the course, could be announced sometime this summer.

“The current humanities course focuses on the classical world in its ancient Mediterranean context; this has not always been the case and the faculty differ on how important they think this focus is to the course,” Kevin Myers, a spokesman for Reed, told The College Fix.

“Among other questions, the review will consider the focus for the next iteration of the course,” he continued. “Regardless of its content, the main emphasis of the humanities course is for students to develop the skills that will help them succeed in their classes at Reed and their lives after graduation.”

Reed student Addison Bates is among those leading the charge to see the course erased. She said she has been motivated by the college’s low black student population and graduation rate. Bates sees the mandatory class as evidence Reed has failed to commit to diversity because the curriculum requires students to study works by white authors.

Bates said Reedies Against Racism want to see literature from outside the “Caucasoid” region incorporated into the class.

Now, as part of this group’s 25 demands…the students are calling on the school to open their eyes and understand their hurt feelings on the “foundational texts” that they are subjective and the professors who teach Humanities 110 should be “conscious of the power the class gives to already privileged ideas and welcome critique of that use of power”

Here’s what one of the crybabies had to say:

This protest has drawn so much attention that they ended up taking over the entire lecture hall, this forced the teacher who was unable to deliver his lecture, to move the class outside where he continued to do what he was suppose to do and teach those that wanted to learn.

In John Hawkins’ new book, ‘101 Things All Young Adults Should Know’, he teaches in number 70 of the book, When it comes to life, your attitude should be, “If I didn’t earn it, I don’t deserve it.”

This is something these whiny babies need to know. They have no right to be offended, they have lived plush lives compared to their ancestors who actually fought and endured so these snowflakes could have what they have today. Why are they squandering it on wanting the world to be racist still so they can be butt hurt for it?