In 1995, my husband handled an IT contract with the teacher’s union in Las Vegas. They didn’t notice him much and so freely discussed things around him. That’s when he learned that the union was full of militant gay activists that were targeting our kids in school for their political agenda. Fast forward to today and you see that not only is the union communist, they are now connected to Antifa which has ties to NAMBLA, the North American Man Boy Love Association. In the middle of this violent perverse storm of evil sits our children who are being taught by these radicals.

One of the biggest groups in Antifa is BAMN… By Any Means Necessary. You will find them behind the riots and violence in Berkeley, Sacramento and across the nation. A LOT of school teachers now belong to this subversive communist organization. A number of those teachers hold high-ranking positions within the organization. The police and the FBI noticed them years ago, but really became attentive to their movements after the riot and stabbing violence in Sacramento that sent ten people to the hospital. They were protesting a white supremacist rally there. 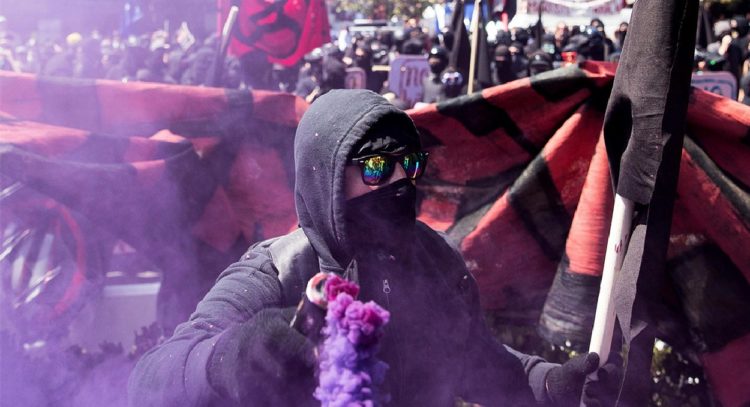 Another teacher heavily involved in the movement is Yvette Felarca. She is a Berkeley middle school teacher and a pro-violence militant. She is also an organizer for BAMN. Right now, she’s facing charges of inciting a riot for her part in the Sacramento violence. She also led the charge against Milo Yiannopoulos and got him shut down with riots in the streets of Berkeley. Her next target was Ann Coulter, who was shut down before she ever got a chance to speak in Berkeley.

Antifa has ostensibly now been labeled a domestic terrorist group… sort of. The FBI and DHS have now designated the actions of Antifa as “domestic terrorist violence.” Words matter here and they have not solidly branded them as domestic terrorists. But that is coming. Felarca is one of the reasons it will earn that title. Last weekend, she assisted in organizing BAMN’s demonstration that “shut down” a free speech rally in Berkeley. Those events almost got an innocent videographer beaten to death and saw a number of people pummeled, pepper sprayed and assaulted. Even Nancy Pelosi called it criminal and condemned their actions. She said they should be locked up. Felarca on the other hand called BAMN’s actions a “resounding success.” I’m sure one way or another she was also involved in the 40,000-strong protest in Boston.

The teachers who are part of BAMN are using our classrooms as recruiting grounds for their movements. They are indoctrinating the children… pulling them into their radical group. It’s brainwashing and manipulation, pure and simple. And it’s been going on since at least 2005 and probably much longer than that. BAMN organizer and high school teacher Nicole Conaway organized a “sickout” at her school in 2015, leading other teachers to call in sick to protest the policies of Republican Gov. Rick Snyder. The sickout forced six Detroit-area schools to cancel classes, affecting nearly 4,000 students. A month later, Conaway led students in a walkout over building conditions. She was one of three BAMN organizers arrested in connection with the protest. Other BAMN members have led similar protests at the schools where they teach.

These are full-fledged communists and they are weaponizing students. It’s a communist tactic. All of them hate President Trump deeply and have organized protests against him. He is a prime target for the movement and these teachers are poisoning their students against a sitting President of the United States. They want revolution in the streets and to overthrow the government.

BAMN is very active in both the National Education Association and local and regional teacher’s unions in Michigan and California. Last year, 17 different BAMN members ran for elected positions in the Detroit Federation of Teachers. BAMN also ran five candidates for various leadership positions in the NEA in 2017. When the Berkeley school district suspended Felarca for her violent activism in 2016, the local teacher’s union sued the school on Felarca’s behalf.

Another instigator is BAMN organizer Steve Conn. In 2015, he was elected president of the Detroit Federation of Teachers. Later that year, he was charged with misconduct and removed from office. Conn’s wife is a former teacher. Her name is Heather Mills. They were both fired in 2007 after leading a student protest that got those same students pepper sprayed. They sued and got their jobs back. They also won a $300,000 settlement. Conn still teaches at Western High School currently.

BAMN was founded by the Revolutionary Workers League in 1995 – a militant communist group. They are violent communists and they have been working their way into our school systems and classrooms for years. Although they claim to be anti-fascist, their actions are themselves fascist in nature. The roots of Antifa are communist. There’s a reason they carry red and black flags. Red means communist. Black means anarchy. Red and black means anarcho-communist. The “A” in a circle doesn’t stand for Antifa, it stands for anarchy.

These are teachers that are with our children five days a week. They are a strong influence on them. They are also violent communists who are intent on burning it all down. They want havoc and bloodshed in our streets and they are recruiting soldiers for the cause… our kids. I fear that they have only begun and this will get much, much worse.