I’m a Christian, so I am not going to be unbiased about this. I don’t think anyone should be. A middle-school teacher in Florida is vowing to erect a Satanic display and then invite children to ‘hail Satan’ during Christmas. That’s certainly evil and frankly, shouldn’t be allowed. Many of our schools now don’t allow the children to celebrate Christmas, but they do allow Muslims to observe their holidays. And a number of them allow Satanists in, but not Christians. That’s how screwed up things are. This guy may get away with it because it’s at a public park.

The teacher’s name is Preston Smith and he teaches language arts at Boca Raton Community Middle School. He evidently also specializes in the dark arts and wants to share them with students. He wants to put up a large metal pentagram in Sanborn Square, a local park, along with a “Freedom from Religion Nativity Scene,” reports CBS12. The pentagram is painted blood-red and it weighs about 300 pounds. It has a wooden image of a Satanic symbol in the middle of it and it is worth about $4,000. The caption on the display reads, “In Satan We Trust;” “One Nation Under Antichrist;” and “May the Children Hail Satan.” He’s laughing at these people and taunting them. 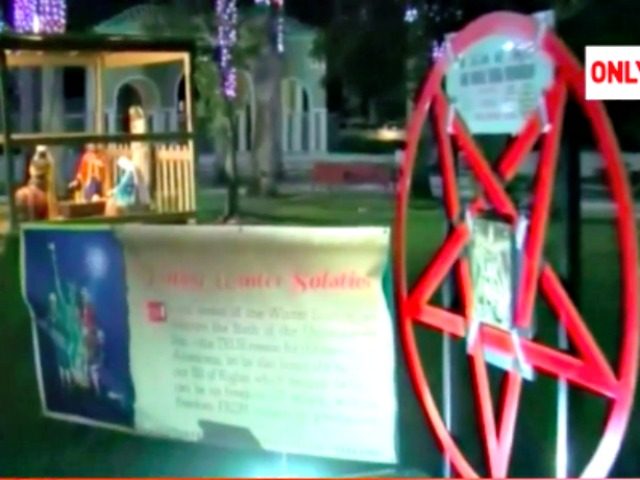 If that doesn’t make your blood run cold, I don’t know what will. Smith is an atheistic Satanist, which I find odd. An atheist does not believe in God, yet this man treats Satan as his God and calls himself an atheist. By the way, he’s a liar. For Satan to exist, God must exist and therefore he couldn’t be an atheist. This devil’s advocate erected a similar display last December in the park, right next to a Nativity scene of Christ in the manger. This ticked off Christians and parents in the community.

Kim Bremer is the president of the school’s parent-teacher association. She wants Smith fired and I don’t blame her. “A teacher we entrust our children with should not be putting a sign like this anywhere,” she explained. A teacher that is evil should not be anywhere near children and this guy is openly evil. Solange Rush is a parent and she wanted her 14 year-old son transferred from this guy’s class, but scheduling conflicts wouldn’t allow it. “I just don’t feel comfortable about it and I don’t agree with it,” Bush said. That’s an understatement. 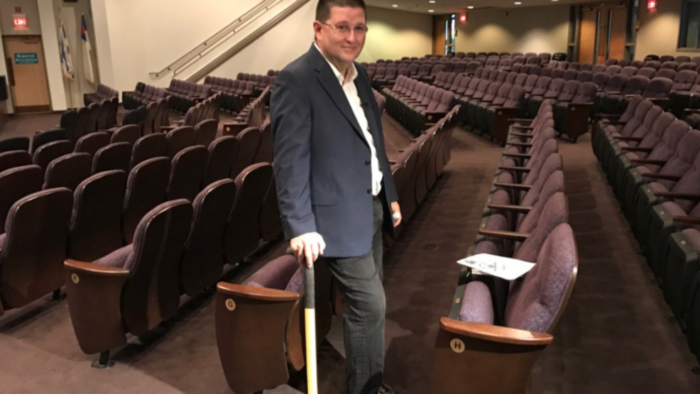 Smith has made statements to the media in the past claiming that he doesn’t “proselytize my own viewpoints in the classroom or disparage any child’s personal faith.” He doesn’t plan on resigning or going anywhere any time soon either. He argues that “students have an uncanny ability to be more tolerant, respectful, and educated about diversity than most adults.”

Pastor Mark Boykin, who is the senior pastor at Church of All Nations in Boca Raton, is vowing to tear down Smith’s Satanic display. “I think this is reprehensible,” the pastor said, showing off his sledgehammer. “I think it’s an insult to our city. It’s evil, it’s the essence of evil,” Boykin added. “I will take the responsibility for taking the sledgehammer and knocking it down.”

Smith for his part is offended by the pastor. He said “he has never experienced this level of hatred from supposedly religious folks who preach love, tolerance and acceptance.” This guy is an adept liar. The pastor will probably go to jail for knocking it down, but I hope he does it anyway. Even the mayor of Boca Raton, Susan Haynie, said she personally found the display “extremely offensive. But you know, again, we’ve chosen as the council to honor free speech,” she said. Similarly, Scott Singer, a city council member, said, “This is not consistent with my particular values, but free speech means people have an opportunity to express themselves, whether government likes it or not or whether individuals like it or not.” That’s true, but I wonder how long people will tolerate Satanists in their midst and with them teaching their children.