MSNBC’s Stephanie Ruhle[1] gave the commencement speech at Lehigh University this year and she made it all about you-know-who… President Donald Trump. She entitled her speech: “Rules For Being Good In An Era Of Yuuuuge.” Tacky, but it gets much worse. Trump delivered the commencement speech at that same university in 1988… a point not lost on Ruhle. She graduated Lehigh and was miffed that they had Trump as a speaker. She is also obsessed with his late night Twitter habits and the fact that he gets two scoops of ice cream. I kid you not.

That whole ice cream story got a 4,000 word article written on it by the media… just stupid. They claim Trump gets two scoops, while his guests get one. You people are pathetic. Is that the best you can do? If so, you don’t deserve to be in the media period. Do us all a favor and slink away. And of course, Ruhle referenced Trump’s accusations that President Obama wiretapped him and his associates during the 2016 presidential campaign. “If you break something, say sorry. If you flake on a commitment say sorry. If you accuse the former President of the United States of criminal wiretapping and you’re wrong, say sorry,” Ruhle stated. Except Trump wasn’t wrong and she knows it.

The MSNBC host titled her speech “Rules For Being Good In An Era Of Yuuuuge” and seemed more than acutely aware that Trump had delivered the commencement address at Lehigh in 1988.

“One of those huge business leaders in particular descended on Lehigh 29 years ago in his big black helicopter, with his name emblazoned on the side in gold,” Ruhle said. “I’m sure he was not surprised to be extended this honor, but I was. When Chairman Scheler called me, I was unsure, and a little uncomfortable.”

Ruhle, who graduated from Lehigh, continued to reference Trump throughout her speech, knocking his late-night tweeting and reports that he eats two scoops of ice cream for dessert.

“And just because you can have two scoops of ice cream on your chocolate cream pie, doesn’t mean you should. Just try to be good,” she told the graduates. “I’m not talking about a selfishness that means two scoops for yourself and only one for your guests…”

This woman is an unmitigated hack. If you feel like punishing yourself, you can watch the full commencement ceremony[3]. She starts bloviating at 1 hr. and 18 minutes. Personally, I can’t stand the woman and refuse to watch her.

This is the same woman who on her new show stated that integrity “went out the window” when talking about him “a while ago.” She hates President Trump. Fair enough. But to smear the President of the United States during a graduation ceremony is just downright despicable. And it shows how low all of the leftist media has sunk. What a disgrace. 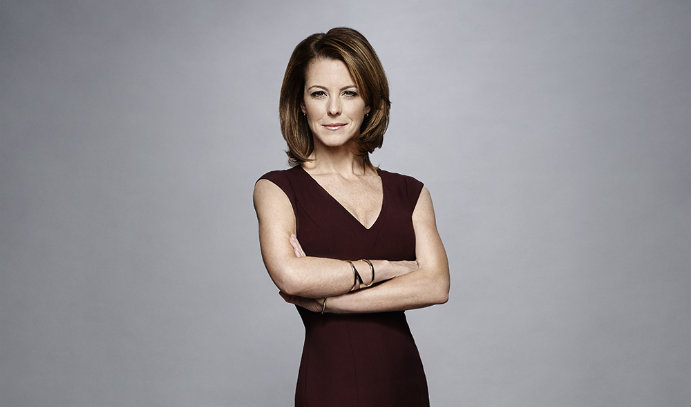