Pro-Life Teens CUSSED OUT By FUMING School Administrator: ‘I Don’t Give A F*** What You Think Jesus Tells Me” [VIDEO] 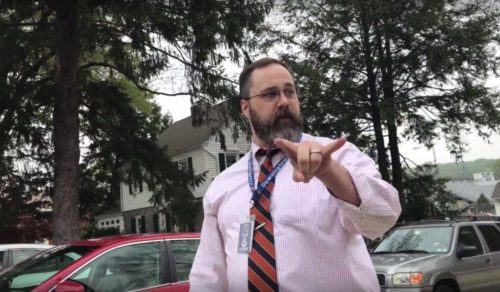 Zach Ruff is exactly the sort of unhinged[2] school administrator that gives schools a bad name. In a recent event outside Downingtown S.T.E.M. Academy, the Pennsylvania high school where Ruff is employed as Assistant Principal, he completely lost it. He can be seen behaving in an extremely unprofessional manner in the video.

Several students, including Connor Haines, 16, and his sister Lauren, 19, were engaged in a peaceful pro-life protest outside the school on public sidewalks. Mr. Ruff started out by trying to tell them they couldn’t legally be there. Of course that isn’t true on a public sidewalk. Then he tried to say that the protesters weren’t allowed to “talk to his students.” Again, not true. So, then what he started doing is arguing with them about abortion. At various times he called unborn children “cells” and asserted that since they could not be removed from the womb and survive on their own, they aren’t people.

The protesters maintained their composure throughout, calmly engaging the Assistant Principal in an ongoing dialogue. At one point he says, “Listen son, I’m as gay as the day is long and twice as sunny. I don’t give a f*** what you think Jesus tells me, and what I should and should not be doing.” He also points at the protesters’ signs and tells them: “You can go to Hell, where they are too,” referring to aborted children. Classy. Sounds just like a guy who should be in charge of students.

The Left consistently attempts to silence speech they don’t like; this is just one more example. Assistant Principal Ruff would be hearing from me if this was my children’s school. He can disagree with pro-lifers all day long…and twice as sunny. But he holds a position of authority in a school and is held to a high standard of conduct. He is modeling for “his students” what it looks like to engage in discussion with people who have different perspectives. And he is doing a very poor job.

The school district made the following statement:

“We do not condone or support the conduct expressed in the video and are deeply disappointed that this incident occurred. His conduct does not represent the values of the school district or the respect we expect our employees to show for the civil rights of others.”

Mr. Ruff has been placed on leave.

In John Hawkins’ new book, ‘101 Things All Young Adults Should Know’, he teaches in chapter 17, “If you want to know what a person really believes, watch their actions.” Ruff’s actions show exactly what he believes about free speech and unborn life. And it isn’t pretty. Get the book for some young adults you know!