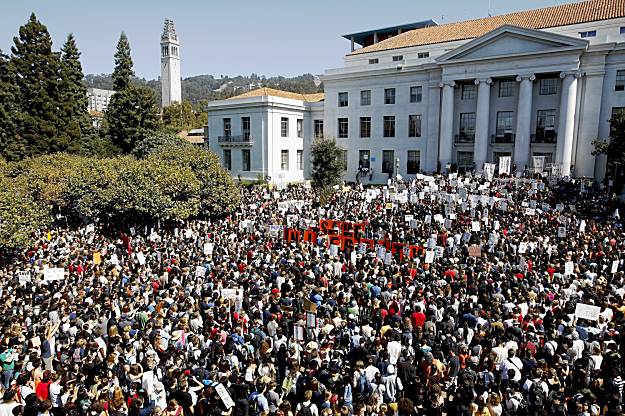 According to the Conservative Tribune, a violent protester who attacked a Trump supporter bragged about the attack on his anonymous twitter account. But it did not take much work to find out who was the face behind the account.

Recent protests at the University of California-Berkeley against Breitbart commentator Milo Yiannopoulos turned violent, with bodily assaults against supporters of President Donald Trump. Through some open-records internet research search, one Twitter user claims to have identified one of those violent protesters from half a world away.

The user, a resident of Europe who goes by the handle Pave Darker, woke up one morning last week to reports that a violent protester kicked a Trump supporter to the ground at Berkeley and knocked him unconscious.

Darker then found that a Twitter user going by the handle “Eugene V. Dabs” referred to the attack and actually claimed to be the assailant.

The account was under the name of “Eugene V. Dabs.” And a little searching using only Facebook and Google told him everything he needed to know. The Twitter account belonged to an EMPLOYEE at the University of California-Berkeley named Ian Dabney Miller. Anyone else concerned???

Hey @AnaKasparian[3]
I live in Europe
Whole ocean between me and @UCBerkeley[4]
Yet somehow I'm better at YOUR job than you ????
Let me explain
1/ pic.twitter.com/YUAeygbBfW[5]