Student activists at UC-Berkeley trashed a memorial that was set up for Kate Steinle last Thursday night. They stole a poster of her face and threw it in a garbage can. The Berkeley College Republicans held a vigil for Kate Steinle in remembrance of her being killed in San Francisco after an illegal immigrant fired a gun in her direction. She died in her father’s arms on Pier 14 in San Francisco, begging her father to help her.

Campus Reform correspondent and Berkeley student Troy Worden spoke with Fox News about it. He said they held the vigil because they “wanted to honor the memory of Kate Steinle, who was the victim of illegal immigration.” About 20 people showed up. There should have been many more than that. The event in Steinle’s name was protested by left-wing campus radicals. After the vigil ended, they were the ones that ripped down the poster of Steinle’s face and threw it away. “An Antifa organization, Refuse Fascism, sent a paid activist to basically desecrate the memorial, to interrupt it, call us fascists, bigots, whatever,” Worden said. “Our message of honoring Kate was totally lost.” 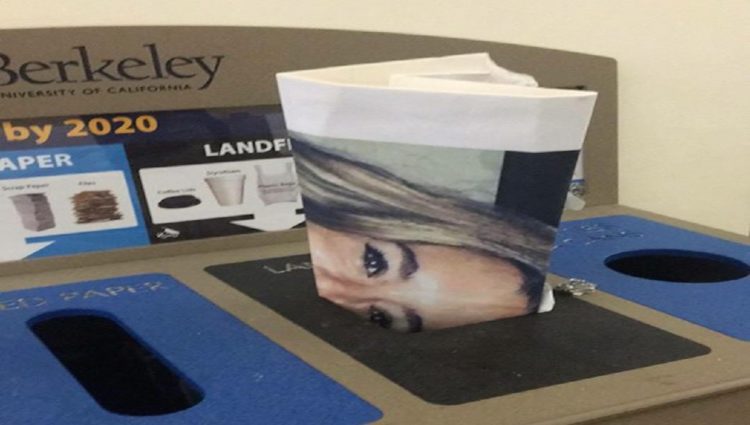 While the vigil was ongoing, UC-Berkeley CR Vice President Naweed Tahmas told The College Fix, protesters showed up. “They were shouting during my remarks, and throughout the vigil. Before, during and after,” he explained. “I couldn’t make out everything they were shouting, but it’s usually: ‘In the name of humanity, we refuse to accept a fascist regime.’” One of their members, Raphael Kadaris, condemned the College Republicans and accused them of politicizing Steinle’s death. He said, “These people don’t care about Kate Steinle. They are using the tragic death of Kate Steinle to incite hatred and bigotry against immigrants.”

Instead of mourning an innocent victim, these commie/anarchists stand with her killer. It’s shameful and it shows how far California has devolved. After the vigil was over, the Berkeley College Republicans left out candles spelling ‘KATE’, the flowers and the poster they created for the vigil. “Some people took it upon themselves to take those things and either get rid of them or tear them up or put them in the trash can,” he said. “This isn’t unique…a few days before the vigil we had actually put up at night posters with Kate’s face on them that said, ‘she had dreams too’ and unfortunately those were taken down too.”

“This is typical at UC Berkeley, where honoring the legacy of someone who was killed by a 7-time felon and 5-time deportee is offensive,” the group posted on its Facebook page, along with photos of the vandalized poster. What kind of evil asshats do something like this? Kate Steinle was without blame here. She was in the wrong place at the wrong time… a sanctuary city to be precise. Her killer will walk free and there is no justice for Kate. But plenty of unhinged hate.

Last night we held a candlelight vigil in honor of Kate Steinle. This morning someone tore up our poster of her and…