Tucker Carlson recently[1] interviewed Keith Fink, who is a conservative professor at UCLA. He was worried about being fired as a lecturer because he is conservative. Well, he was right to be worried. They just canned him. And they really didn’t have a reason. Any reason would do though… they didn’t want a conservative teaching there. This is the epitome of campus leftism.

Fink is fighting back. He has now filed a grievance with his union. All of this started because he dared to teach a free speech course. At the end of 18 quarters of lecturing, he was subjected to an “excellence review,” where a committee of professors would pronounce judgement on this popular professor. At that point, he could have either been promoted to Continuing Lecturer or they could let his contract expire. Guess how this one turned out. 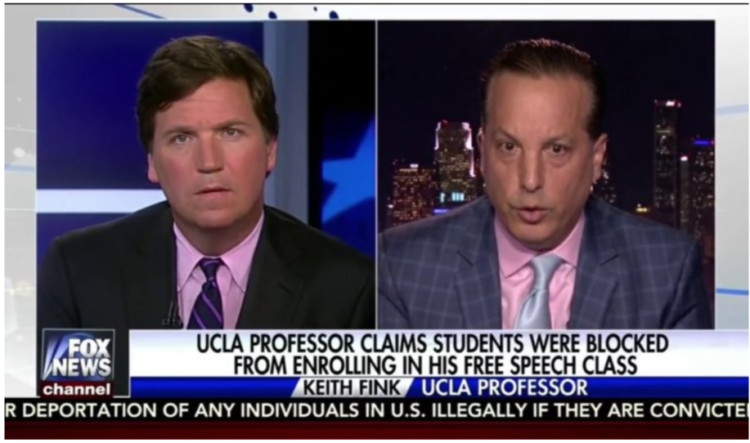 Keith Fink, the conservative University of California-Los Angeles professor who was recently ousted after locking horns with the administration, has filed a grievance with his union.

As Campus Reform previously reported[4], Fink was recently let go after a contentious process that began with efforts by his new department chair to curtail enrollment[5] in a popular free speech course that he teaches, and culminated with an “excellence review” that Fink claims was stacked against him.

A mandatory process after an instructor has taught for 18 quarters, the “excellence review” involves a committee of professors from the department who judge a candidate’s teaching based on a variety of factors, including student feedback, before deciding whether to promote the candidate to “Continuing Lecturer” or allow their contract to expire.

Now, Fink has filed a formal grievance against UCLA with the Faculty Council-AFT[6], the union that represents “non-Senate faculty and librarians” in the UC system.

Fink alleges that UCLA did not provide the required 30 days’ notice before the review. They informed him in a letter on January 25th that he had until February 8th to submit materials for consideration by the review committee. Then the administration “repeatedly changed the timing of the review calendar without providing timely notice,” even after deadlines had already passed for Fink to submit additional materials. He also says they did not give due consideration to student evaluations. They erroneously, and probably purposely, only allowed letters solicited by the department. Sounds biased to me.

The grievance is the first step in all of this to be followed by a lawsuit. Fink also said that another goal in filing the grievance “is to increase awareness both on- and off-campus of the many ways that the University will act in complete derogation of the rules and stop at nothing to silence those that they dislike.” He’s exactly right and I wish him luck. But we are after all talking about a university in California. Most likely, Fink will have to look for employment outside of the state after all of this unfortunately.