I could not agree more with Matt Walsh.[1] I too believe that transgenderism is a mental disorder and I want political agendas out of my bathroom please. Walsh held an event at UCLA entitled: An Encroachment on Liberty: How the Left Exploits Transgender Laws. Because he voiced a conservative view, all hell broke out at UCLA. And it was hateful. The students quickly became the target of heated criticism, condemnation and even death threats from students at UCLA who felt their statements were offensive to transgender individuals. Too freaking bad… that is the leftist response every time when you speak up. On Facebook, the viral pic of UCSB student Andrew Gates and three pretty coeds taking a stand against transgenderism sparked a thousand shares and screams of bigotry, as well as comparing conservatives to ISIS. Sheer insanity.

Controversy erupted at the University of California, Los Angeles (UCLA) after a photo of four students holding signs after a Matt Walsh event in Santa Barbara went viral.

The event, called “An Encroachment on Liberty: How the Left Exploits Transgender Laws,” was hosted last week at the University of California, Santa Barbara (UCSB) by the Young Americans for Liberty (YAL), a conservative campus group. Walsh spoke to students about the topic of transgenderism, an issue that has moved to the forefront of the bathroom policy debate across the country.

After the event, four students posed for a picture while holding signs that read messages such as “Get your agenda out of my restroom,” “There are only two genders,” and “Transgenderism is a mental disorder,” and posted it to social media.

Third-year political science student Julia Nista posted the pic to Facebook and the death threats started in earnest. Angry UCLA students ganged up on Nista, who is a Bruin Republicans board member, and demanded a statement from the Republican campus group. “Julia Nista is one of the girls in the picture. Let’s just bombard her with msgs, or something. Facebook can make a change,” an angry student urged. Another angry student accused the students in the photo of being ISIS “allies.” “That awkward moment when ISIS finds allies at UCLA,” Dahlia Salem wrote online. “Julia Nista piece of shit lmao,” student Bellamy Edward Yoo wrote on Salem’s post. “Dude stfu cuz ure rationalizing yourself with bullshit words. Literally all educated ppl, maybe even urself, knows that it’s 21st century now. If this doesnt imply anything to u, u shud prob tell your parents and ur sickass attitude to go to a community college and learn some basic ‘truths’ about US nowadays. People are fuckin suffering cuz of idiots like you who sips Starbucks all day shopping online for underwears that you’re trying to impress fraternity guys in.” The Bruin Republicans did not stand up for Nista either… they turned on her and distanced themselves. Now, that’s conservatism for you. Not long after that, UCLA’s student government condemned the photo as an act of “hate and discrimination.” Students are now pressing the University to respond to the students with disciplinary action for “hateful messages.” Behold the death of true conservatism and sanity. Not to mention morality and ethics. 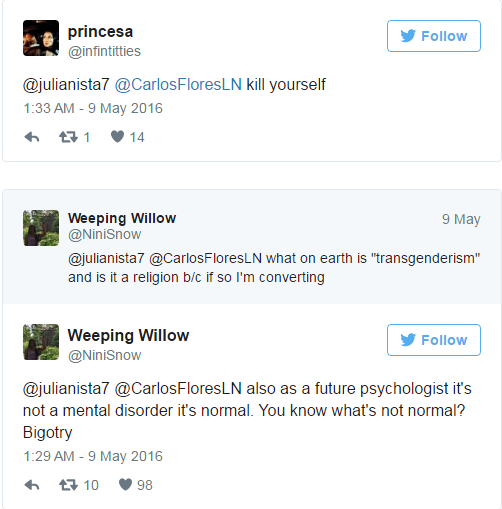