Stephen Davis is the head of Yale University’s residential colleges – Pierson College. Yale caused a massive controversy by taking down the portraits of white men who have served as head of a residential college ahead of a Halloween party. Something about a bid for diversity. Looks like Yale is now the go-to Ivy League school for social justice warriors. Davis is claiming that an email he sent to students last week has been “misrepresented” as saying the white men’s portraits would not be put back up in the dining hall. He says they will be. Frankly, they should never have been taken down in the first place. Just sayin’.

Yale has been going down the social justice rabbit hole for some time now. In a Nov. 1st email to students, Davis wrote that the portraits, which were initially removed to make space for the college’s annual Halloween dance, would not immediately be put back up as customary. “In the context of campus-wide conversations about diversity and inclusion in public art and representation,” Davis wrote, “… we’ve decided to leave the walls empty for the time being, in the hope that the blank walls will begin to prompt conversation on what it means to create common spaces where everyone has a sense of belonging and ownership.” Then after that blew up, he hotly contended he was misconstrued. Dude, we get it… you are a politically correct, race baiting moron.

Davis also said that the fellows’ portraits would be relocated to the college’s Fellows Lounge and stated that administrators would be “working to develop plaques/labels for them … to mark their historical context and significance.” He said students would be given an opportunity during a “study break” to create portraits of themselves and one another for display in the dining hall. Wow… that is massively stupid and disrespectful to those great men of Yale of the past.

Davis says now that his comments were ‘misrepresented’. He denied in a post on the college’s Facebook page that he intended to remove the portraits permanently from the dining hall and claimed they would have been restored after an unspecified period of time. Right. He claims that painting in the Fellows Lounge has delayed putting them back. “With regard to our plans moving forward, I fully expect any proposals we make regarding the diversification of our public spaces to be inclusive of the portraits honoring my predecessors,” Davis added. That is called backpedaling.

To the Pierson community,I want to thank all the Piersonites who turned out for our Popeye’s and Public Art Study…

The same day that Davis was cleaning up his unforeseen mess, Yale College Dean Marvin Chun wrote in an email to the Yale Daily News that he believed the portraits of the former college heads should remain visible, “both for preserving the colleges’ histories and for honoring the intentions of alumni, fellows and friends who generously commissioned these portraits. The two goals of reflecting Yale’s community today and honoring its past are not mutually exclusive.” That’s exactly right.

Pierson College previously drew unwanted attention when its dean, June Chu, resigned this past May after posting reviews on the website that called people “white trash” and “low class.” Yale is not what it used to be in soooo many ways.

What role does art in public spaces play?

Pierson removed the HOC portraits in the dining hall for longer than normal after the annual Inferno, but the portraits will be rehung amid student work soon. 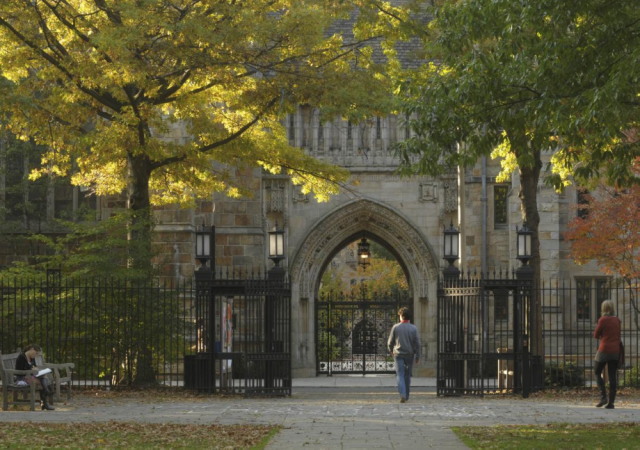