Terrorism returns to Canada. Across Edmonton, at least five people were hurt in terrorist attacks late yesterday. Authorities are calling it terrorism and they are saying it is connected to ISIS. The attacks occurred near Commonwealth Stadium in Edmonton and involved vehicle rammings and stabbings. The Edmonton Eskimos were hosting Winnipeg at the stadium for Canadian Forces Appreciation Night when a man plowed into a police barricade in a Chevy Malibu at a high rate of speed before hitting an officer, sending him 15 feet into the air before jumping out of the car. The 30 year-old man viciously attacked a police officer, stabbing him after jumping out of the car. A struggle then ensued, during which the male suspect stabbed the officer several times before fleeing the scene on foot, northbound down 92nd Street.

An ISIS flag was found in the Malibu. Officers searched for the man for two hours and they knew his name. One officer spotted a U-Haul and asked to see a driver’s license, which matched the guy they were looking for. The U-Haul immediately took off toward downtown Edmonton, where streets were filled with Saturday night bar crowds and football fans. In front of everyone, the U-Haul charged down the street with up to 20 police vehicles giving chase. “The police cars just kept coming. They just kept coming,” said Jaylene Ellard, who was out with a friend on the crisp fall evening. The U-Haul hit at least four people before somehow coming to rest on its side.

A local bar manager related how he saw the U-Haul come barreling down the alleyway next to his establishment and hit two patrons. “We were just standing out front here and basically a U-Haul was heading north down 109th Street and peeled into this smoking alley here where people were having a smoke,” he recalled. “There was like ten cop cars following him. It was crazy. It just came around the corner, ripping. I thought at first he was pulling over for the cops coming by, but he was clearly the one they were chasing.”

One of the two victims was hit very hard. A barmaid helped the victim… she’s a registered nurse. He was still breathing when paramedics took him away. Edmonton Police Service Chief Rod Knecht has advised the public to “be vigilant and aware of your surroundings,” but stressed that the suspect is in custody and is believed to have been acting alone. “I want to be clear. We don’t believe there’s any risk to public safety right now. This is a lone individual,” he said. Of course, that’s what they always say even when it’s time to kiss your arse goodbye.

That's what appears to be a U-Haul truck on its side at 107 Street and 100 Ave. Witness told me saw u-haul hit pedestrians. #yeg[2] pic.twitter.com/5UszZMgCV9[3]

“Throughout the chase, the U-Haul truck deliberately attempted to hit pedestrians in crosswalks and alleys in two areas along Jasper Avenue,” Knecht said. Pat Hannigan was about a quarter-block away when he heard a loud bang. “I saw the van on its side, it flipped over, U-Haul van,” he said. “And they had a guy handcuffed on the ground and obviously they smashed out the window. They had a pipe or something in their hand.” The police officer who was stabbed was hospitalized, but will be okay. Ironically, this happened outside a football game. Just sayin’.

ISIS is using Telegram, an encrypted messaging application, and other social media to disseminate a message instructing Muslims in the United States, France, the United Kingdom, Canada, Russia and elsewhere “to remove themselves from public places that are prime targets for ISIS fighters,” according to the Middle East Media Research Institute, or MEMRI. “ISIS attacks on these sites are imminent and the organization will use any killing method available,” according to MEMRI, which published a copy of the message, which was also sent to Muslims in Australia, Belgium and Italy. ISIS is threatening to “explode, run over people with vehicles and cut off their necks,” according to the threat.

#BREAKING[5] Terrorism suspected in Edmonton involving a vehicle ramming into pedestrians, an officer stabbed, and an ISIS flag found in a car. pic.twitter.com/Jfsa3oVyK6[8]

#Edmonton[10] #Canada[11] – Man arrested after mowing down and stabbing a police officer several times in "act of terrorism". pic.twitter.com/z94Ps6A15R[12] 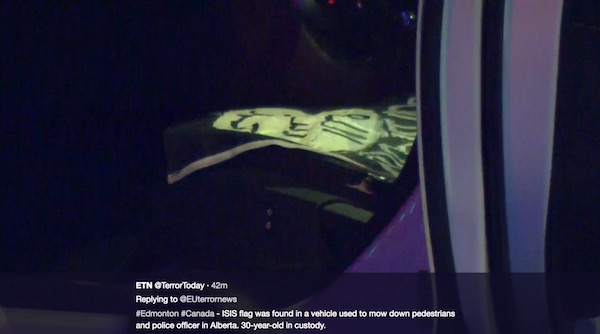 In the Malibu, an ISIS flag was found.