Liberal depravity would be comical — if it weren’t imposed by force. Canada just passed a law making it illegal to refer to people by the biologically appropriate pronoun if they prefer some other pronoun. Seriously:

The bill adds “gender expression” and “gender identity” to Canada’s Human Rights Code and to the Criminal Code’s hate crime section. With the Senate clearing the bill with no amendments, it requires only royal assent in the House of Commons to become law.

Critics warn that under Bill C-16, Canadians who deny gender theory could be charged with hate crimes, fined, jailed, and compelled to undergo anti-bias training.

That is, in addition to criminal penalties, they would have to endure brainwashing too twisted for anyone in North Korea to have dreamed of it, all for the thought crime of refusing to pretend that men are women and vice versa.

He would. A more authoritarian (not to mention nauseating) moonbat would be difficult to imagine.

As the liberal war on objective reality escalates, we will continue to experience bizarre and tyrannical attempts at mind control that would have made slaves of the Soviet system gasp in horror. The likes of Trudeau do not hesitate to use brute coercion to compel their victims to explicitly deny that 2 + 2 = 4. 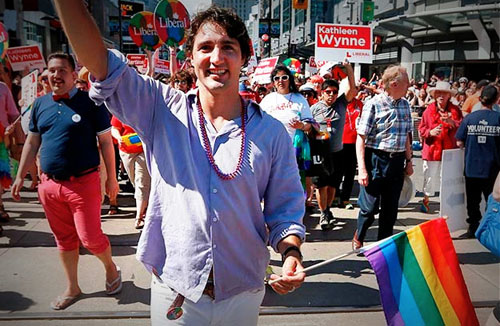 On tips from Steve A, Bodhisattva, Dragon’s Lair, Ken in Florida, and Jester. Cross-posted at Moonbattery.