Carl’s Jr. CEO Responds To Liberals Demanding $15 Minimum Wage – They Are NOT Going To Like This…

I predicted just this.[1] As fast food workers clamor for $15 an hour instead of letting the market dictate pay rate, CEOs and employers are now looking for alternatives. Carl’s Jr.’s CEO Andy Puzder is now looking at automated fast food. It actually makes sense and would not only increase profits, but result in more business. You have touch screens and automated pay options to place your order. Your order would automatically appear before you and off you go unless you need to ask a question, which would be handled by another touch screen. Liberals have just priced themselves out of existence. Well done. 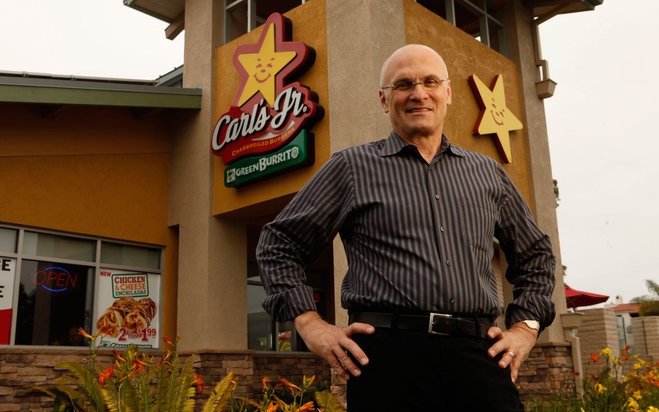 The CEO of Carl’s Jr. and Hardee’s has visited the fully automated restaurant Eatsa — and it’s given him some ideas on how to deal with rising minimum wages.

“I want to try it,” CEO Andy Puzder told Business Insider[3]. “We could have a restaurant that’s focused on all-natural products and is much like an Eatsa, where you order on a kiosk, you pay with a credit or debit card, your order pops up, and you never see a person.”

Puzder takes a highly conservative stance when it comes to the minimum wage issue — he’s written two op-eds against it in the Wall Street Journal.

“With government driving up the cost of labor, it’s driving down the number of jobs,” he said. “You’re going to see automation not just in airports and grocery stores, but in restaurants.” Entrepreneurs make their very living by solving problems and liberals demanding outrageous pay for low level work is one that is easily solved these days. “This is the problem with Bernie Sanders, and Hillary Clinton, and progressives who push very hard to raise the minimum wage,” said Puzder. “Does it really help if Sally makes $3 more an hour if Suzie has no job?” Puzder has really warmed to the idea of robots and I have to say, I’m beginning to as well: “They’re always polite, they always upsell, they never take a vacation, they never show up late, there’s never a slip-and-fall, or an age, sex, or race discrimination case,” said Puzder of swapping employees for machines. Imagine the legal expense saved! Not to mention regulatory compliance. It’s as I have said most of my life… if you want job security, you had better work for yourself. No one will pay you better or work you harder.