My heart broke this afternoon[1] as I heard that Glen Campbell passed away at the age of 81. He had suffered from Alzheimer’s for a long time. I grew up listening to him. My father loved his music. I can hardly imagine a world without a true country legend like Glen Campbell. He was known as the “Rhinestone Cowboy.” Millions loved his guitar playing, his sweet music and rugged good looks. I will truly miss him. It’s like a part of my childhood has been swept away.

Glen passed away this morning around 10 am in a Nashville facility for Alzheimer’s patients. It hardly seems fitting or fair that he went that way. He released more than 70 albums and sang for over 50 years before he could no longer perform. He was most famous in the 60s and 70s. Campbell didn’t have it easy, but he kept on singing and never gave up. He was most famous for hits like “Gentle on My Mind,” “Wichita Lineman,” “Galveston,” “Country Boy” and his best-selling single, “Rhinestone Cowboy.” I loved all of them. 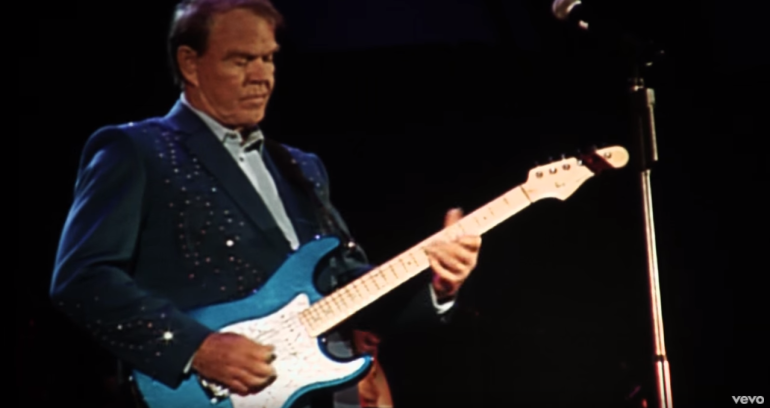 Campbell died Tuesday around 10 AM in a Nashville facility for Alzheimer’s patients … according to a source close to his family.

The musician released more than 70 albums over a 50-year career, and had a series of hits in the ’60s and ’70s including “Gentle on My Mind,” “Wichita Lineman,” “Galveston,” “Country Boy” and his best-selling single, “Rhinestone Cowboy.”

Glen made history in 1967 by winning 4 Grammys in the country and pop categories, and took home CMA’s Entertainer of the Year award in 1968.

Campbell was also an actor and TV host who starred in the variety show, “The Glen Campbell Goodtime Hour” on CBS from 1969-1972. The 2014 documentary “I’ll Be Me” documented Glen’s farewell tour and struggle with his Alzheimer’s diagnosis.

Over his career, he won four Grammys. He also acted and had his own show at one time. He’s survived by his wife, Kim Campbell, and 8 children. I had no idea he had so many kids. His wife is scheduled to speak at The Alzheimer’s Alliance of Smith County luncheon in Tyler, Texas in November about the challenges faced by people living with the disease and their families. It’s been very hard on Campbell’s family.

RIP Glen Campbell. You were one of the greats of all time. He can rest now, but his music will live on. There’s no way to forget him… personally I always associated his face with the Wichita Lineman. What a terrible loss for all of us… it just brings tears to my eyes and sadness to my soul to say goodbye to him.