Actor James Woods Just Called Obama Out On His NASTY Ego – With This ONE Tweet!

I simply adore James Woods![1] He gets it right every single time. He knows, just as you and I do, that Obama will never call the persecution and eradication of Christians in the Middle East genocide. It will never, ever happen. In a tweet posted on March 10, James Woods wrote the following: “#Obama is more likely to walk on water than he is to acknowledge the genocide against Christians.” Instead, they are dithering over the definition of ‘genocide’ while Christians are slaughtered wholesale. 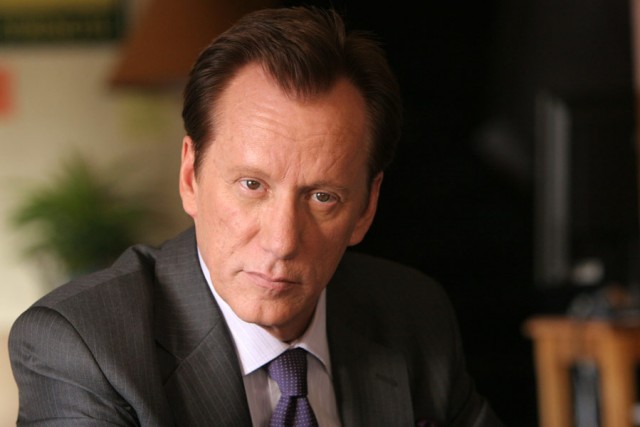 Actor James Woods is skeptical that President Obama will call the persecution of Christians in the Middle East genocide.

In a tweet posted on March 10, Woods wrote the following: “#Obama is more likely to walk on water than he is to acknowledge the genocide against Christians.”

The State Department and White House have not labeled atrocities against Christians in the Middle East genocide, but are facing a congressionally mandated March 17 deadline to make a decision. 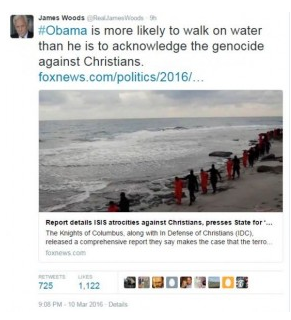 Woods also linked to a Fox News story that went into the release of a new report by Middle Eastern Christian leaders, human rights advocates from the Knights of Columbus and the group In Defense of Christians (IDC). It details how ISIS is torturing and murdering Christians. They call on the US to take definitive action to stop the carnage and violence. It’s falling on deaf ears. In my opinion, Obama is a Muslim. Our whole government and military have been infiltrated by them as well. They hate Christians and want them dead. Is it any wonder that Obama would not call what he views as a righteous cleansing, a ‘genocide’? James Woods is right on calling out Obama on his nasty ego and his disdain and hatred of Christians.